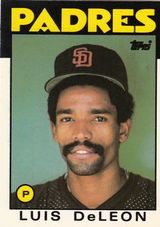 Luis DeLeon's nickname is "Mambo", to differentiate him from the four other DeLeon kids named Luis.

Luis represented Puerto Rico in a record 12 Caribbean Series, with the last one coming in 2003. He went 4-2. In 2011, he was inducted into the Caribbean Baseball Hall of Fame along with Roberto Alomar, Carlos Baerga and Candy Maldonado.