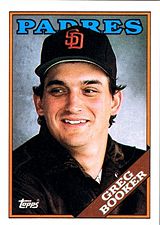 [His career] has to be the most blatant display of nepotism I've ever seen first hand... Nobody held this against Greg. He was one of the more popular players on the team." - Steve Fireovid, from The 26th Man with Mark Winegardner

Booker is the son-in-law of Jack McKeon and brother-in-law of Kasey and Kelly McKeon. His son, McKeon's grandson, Zach, was a first baseman and catcher in the minors. Greg's major league career is unexplainable without the family relationship: Booker had rough statistics in the minor leagues, which would have gotten any other pitcher his unconditional release, and he never did anything in the major leagues to justify his presence. Even with the family ties to "Trader Jack", McKeon dealt him to the Minnesota Twins for Freddie Toliver in June 1989.