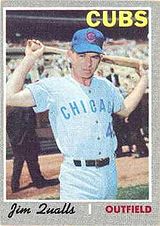 "Jim Qualls knows his place in the tormented souls of Mets fans. They still send him letters and autograph requests about the most famous of his 31 career hits, the single that ended Tom Seaver's bid for a perfect game four decades ago." - from an article about Qualls breaking up a no-hitter in 1969

Jim Qualls played outfield and second base during three years in the major leagues. Most of his games were as a center fielder with the Chicago Cubs in 1969.

Qualls played in the minors as an infielder/outfielder from 1964 to 1972. In 1969 he spent part of the season with the Tacoma Cubs, hitting .318, but also missd a number of weeks while serving in the National Guard at the time of the Vietnam War.

He was a righthanded batter early in his pro career until he suffered a broken jaw after being hit by a pitch from a righthanded pitcher. After that, he became a switch hitter.

Qualls made his big league debut with the Cubs in 1969. Despite being primarily an infielder in the minors, he appeared in 35 games in centerfield for the Cubs. He broke up a perfect game by Tom Seaver of the New York Mets on July 9th of that year with a single in the top of the 9th inning.

Qualls was traded to the Montreal Expos early in the 1970 season. After appearing in 9 games for the Expos, he was sent down to the Winnipeg Whips. While with the Whips, he got into a dispute with the club about meal expenses, and he eventually returned home to California in August.

Qualls was sent to the Cincinnati Reds the next spring but spent the entire 1971 campaign with the Indianapolis Indians, with whom he hit .253 in 94 games. After that season, he was traded to the Chicago White Sox. He made the Sox's Opening Day roster in 1972 but appeared in just 11 games, primarily as a pinch hitter, prior to being released.

He finished his pro career with the Kintetsu Buffaloes in Japan in 1972 and 1973.

After his baseball days he lived in small-town Illinois, mostly working as a farmer and running a feed business.