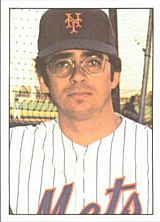 Skip Lockwood played 12 seasons in the big leagues, recording 68 saves. He was first a third baseman in the majors, then a starting pitcher, but spent most of his major league career as a reliever.

Lockwood was signed out of high school and began his minor league career as a third baseman in 1964 at Burlingon, where he was a teammate of Rene Lachemann. Because of the bonus rule in effect at the time, he had to spend the next season in the majors and made his major league debut in April 1965 with the Kansas City Athletics, appearing in 42 games (only seven in the field). He was back in the minors in 1966. After two more years as a position player, he became a pitcher in 1968. He went 6-3 in 1968, 6-2 in 1969 and 4-1 in 1970 in the minors. He came back to the majors as a pitcher in 1969, pitching six games with the doomed Seattle Pilots. He moved with the team to Milwaukee and pitched mostly as a starter from 1970 to 1973.

He attended the Massachusetts Institute of Technology after his baseball career was over, earning a master's degree. Prior to that, during his baseball career, he had earned a college degree from Emerson College and done some other graduate work. His wife, Kathleen, has written her autobiography, centered around the challenges of being a baseball wife. Skip released his own memoir, Inside Pitch, in 2018.