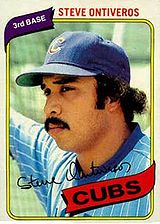 Steve Ontiveros played eight seasons in the majors before going to Japan to play six seasons.

Steve played in the minors from 1969 to 1973, hitting .357 with a .591 slugging percentage for the Phoenix Giants in 1973. He first came to the majors in August of that year, with the San Francisco Giants. In his best year in the majors, he posted a line of .299/.390/.423 for the Chicago Cubs in 1977. Primarily a third baseman during his time in the bigs, he also played first base and the outfield.

In 1980, Ontiveros became the improbable first player to sign a million-dollar contract in Nippon Pro Baseball history. He signed with the Seibu Lions as one of the beneficiaries of Yoshiaki Tsutsumi's deep pockets. Ontiveros hit .314/.381/.562 with 16 homers in 65 games in a partial season that first year. In 1981, he slipped drastically and had his worst year for Seibu, batting .271/.356/.374 with 7 homers. He did lead the league in times hit by pitch (16).

The next spring training, in 1985, Ontiveros ran into a conflict with manager Tatsuro Hiroka when he did not run out an infield grounder. Hiroka said that Ontiveros was "taking Japanese baseball lightly" while the player countered that he did not want to pull a muscle given the cold weather. Steve finished his Japanese career that year when he batted .315/.397/.434 with 11 HR. He led the Pacific League in sacrifice flies (8). Among players with 2,000 or more at-bats in NPB, Ontiveros ranked 17th in average (.312) as of 2005. He had a .403 OBP in Japan and a .474 slugging percentage.

Ontiveros had a mixed relationship with Hiroka. Hiroka was a tough disciplinarian who refused to praise his players; Ontiveros compared him to one of his Chicago Cubs managers, Preston Gomez. He said that he learned to respect Hiroka when he realized that he was harsh on both his American and Japanese players and that he was "100-percent baseball."

After retirement Ontiveros worked for an advertising firm. Ontiveros' brother Ed Ontiveros was a minor league pitcher for the Houston Astros.

In 1989, Ontiveros played for the St. Lucie Legends of the Senior Professional Baseball Association. He hit .293 in 55 games with the club.

Sources include japanbaseballdaily.com by Gary Garland, "You Gotta Have Wa" by Robert Whiting