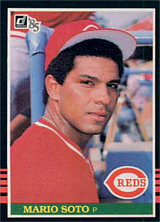 Strikeout artist Mario Soto spent a dozen years in the majors with the Cincinnati Reds and was one of baseball's top pitchers of the 1980s. He was in the top ten in Cy Young Award voting four times before coming down with injuries that ended his career at a fairly young age.

Born in the Dominican Republic, Soto was signed by the Reds at a 17 in 1973 and reached the big league club four years later in 1977. In the 1979 NLCS against the Pittsburgh Pirates, he threw two hitless innings of relief in what would be the only postseason appearance of his career. The following summer, he split his time between the bullpen and the rotation but still finished third in the National League with 182 strikeouts.

Soto's 1984 campaign was a series of ups and downs. On May 12th, he came within one out of a no-hitter against the St. Louis Cardinals, surrendering only a homer to George Hendrick. However, later in the summer, he was suspended twice for a pair of on-field fights. Nonetheless, he was an All-Star for the third time and won a career-best 18 games. Despite posting a losing record in 1985, he was again runner-up for the NL strikeout crown, but injured his arm in 1986 and only saw limited action the next two seasons before being released by the Reds during the 1988 campaign. He tried a comeback in the Los Angeles Dodgers organization at 32, but after just one appearance for the Bakersfield Dodgers he hung up his uniform for good.

The most similar player to Soto at age 31 is Chuck Finley. Since Finley went on from that point to win many more games, getting up to 200 victories, it is fair to say that Soto might have also reached 200 wins had injuries not prematurely ended his career.

In 2001, Soto was inducted into the Cincinnati Reds Hall of Fame.