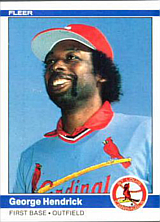 George Hendrick was the 1st overall selection in the 1968 January amateur draft and went on to play 18 years in the big leagues. He was in two World Series and four All-Star Games. He hit over .300 several times and slugged 20 or more home runs six times. In the 1972 World Series, he replaced Reggie Jackson as the Oakland Athletics' center fielder against the Cincinnati Reds after Jackson was hurt in the final game of the ALCS. In the 1982 World Series, he was the starting right fielder for the St. Louis Cardinals when they defeated the Milwaukee Brewers. Both series went seven games.

The most similar player, according to the similarity scores method, is Dusty Baker, a contemporary. In 1989, Hendrick played for the Gold Coast Suns of the Senior Professional Baseball Association. He hit .291 with 36 RBI for the club.