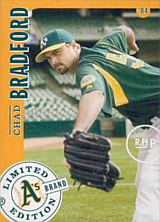 Chad Bradford was one of the Oakland A's players prominently featured in the book (and eventual film) Moneyball. Bradford threw nearly underhand. In fact, his hand was known to scrape the ground as he pitched. He was very effective against right-handed batters, but less so against lefties.

Bradford once pitched 74 games without allowing a home run, a major league record until Peter Moylan broke it in 2009. He was particularly effective in the postseason, posting an ERA of 0.39 (1 earned run in 23 1/3 innings) over 10 series. However, much like a LOOGY, he did not have a single decision in the postseason. In the regular season, he only posted 10 or more decisions in 3 out of his 12 seasons, and never more than 13, even though he pitched as many as 78 games, and made 561 appearances overall.

In the 2011 Moneyball film, Bradford was portrayed by Casey Bond.