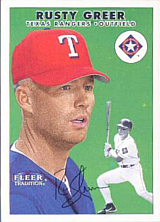 Rusty Greer played nine seasons in the big leagues, all with the Texas Rangers, who drafted him in the 10th round in the 1990 amateur draft. A left fielder, his career slash line of .305/.387/.478 showed an ability to hit for a good average, good plate patience, and above-average power. He didn't steal many bases, but he did steal 9 times in 9 tries in 1996.

He finished 3rd in the 1994 American League Rookie of the Year Award voting, behind Manny Ramirez and Bob Hamelin.

Known for his hustle, Greer collected 11 hits in his first 13 career games. In 1995, his second season, he hit a pinch hit grand slam and a two-run shot to win games for the Rangers.

Among the top six in walks and RBI in Rangers history, Greer recorded his 1,000th career hit on August 7, 2000 - reaching that milestone faster than anyone in team history.

He is the only major league player ever to come from the University of Montevallo, a small college in Alabama.

The most similar player is a surprise, Zeke Bonura, the first baseman from the 1930s. However, in spite of the difference in eras, Bonura and Greer have similar offensive stats, both having relatively short but highly productive careers in a live ball context.

Rusty was inducted into the Texas Rangers Hall of Fame in 2007. In 2014, he was a special instructor in spring training for the Rangers.

His son Mason Greer, a second baseman, was drafted out of high school in the 2019 amateur draft.