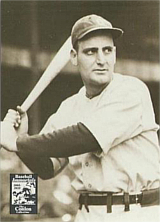 First baseman Zeke Bonura hit for average and power during his seven year big league career but was known to lack effort as a fielder.

Bonura (pronounced like Sonora) excelled at several sports during his younger years. As a teen, he was the 1925 National AAU Champion in the javelin throw, defeating 1924 Olympic gold medalist Johnny Myra, and set an American record (213 feet, 10 1/2 inches) which stayed on the books until 1930. He went on to attend Loyola University New Orleans, where he was on the baseball, football, basketball, and track teams. In the minors, he was the 1933 Texas League MVP while playing for the Dallas Steers.

The Chicago White Sox purchased Bonura's contract following the 1933 season, and he responded by hitting .302 with 110 RBI and a then team-record 27 homers (which also stood as the Sox rookie record until Ron Kittle broke it in 1983). In 1936, he drove in 138 runs, also a White Sox record until Albert Belle broke it in 1998. Over four seasons in Chicago, Bonura hit .315 and smashed 79 home runs. However, he was a liability in the field. Despite leading AL first basemen in fielding two times, he had little range and a reputation for a lack of effort: he often would simply wave his glove at ground balls as they came past, what became known as "the Bonura salute". He also angered Sox management with annual salary holdouts during spring training. Prior to the 1938 season, he was traded to the Washington Senators for Joe Kuhel, one of the best fielding first basemen of the era.

With the Senators in 1938, Bonura hit 22 homers and had 114 RBI before being traded to the New York Giants after the season. After being sent to New York, Bonura was quoted as saying "Now I won't be able to sign my letters Senator Henry J. Bonura, Democrat, Louisiana." Bonura played one year with the Giants, hitting .321, but his power numbers fell off. He split the next year between the Senators and the Chicago Cubs, with whom he ended his big league career.

Bonura missed 1942 to 1945 due to military service. He later managed in the minors for several years. A member of the Texas League Hall of Fame, Zeke died in 1987 at 78.