First baseman Bill "Moose" Skowron played fourteen seasons in the majors, mostly with the New York Yankees. A power-hitting first baseman who also hit for average, he was a six-time All-Star. Averaging a World Series appearance every other year in his career, Skowron went to seven, earning five World Championship rings, four with New York and one his lone trip with the Los Angeles Dodgers.

Born and raised in Chicago, IL, Skowron earned his nickname after a grandfather's haircut left him resembling Italian dictator Benito Mussolini according to childhood pals. He went on to Purdue University, winning a Big Ten Conference batting title and playing halfback, punter, and kicker for the football powerhouse. Prior to the 1951]campaign, he was signed by the Yankees. He spent the majority of his first season with the Norfolk Tars, with whom he led the Piedmont League with a .334 average. He had an even better year in 1952, hitting .341 for the Kansas City Blues while leading the American Association with 31 home runs and 134 RBIs, and was named Minor League Player of the Year by The Sporting News. Nonetheless, he was back in the minors with Kansas City in 1953. 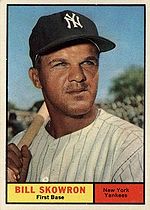 Reaching the majors with New York in 1954, Skowron initially was platooned with Joe Collins. He had a very successful rookie season, hitting .340 with a .577 slugging average, and he hit over .300 in his first four years in the majors. He was the Yankees' regular at first base by 1956, and that fall, he hit a grand slam in Game 7 of the World Series against the Brooklyn Dodgers, as his team won the Fall Classic. Starting in 1957, he began a string of five straight All-Star Game appearances.

Skowron was traded to the Los Angeles Dodgers for Stan Williams following the 1962 season. He hit just .203 in 89 games for L.A. in 1963 but made up for it to some extent by hitting .385 with a home run in the World Series in a Dodger victory over the Yankees. Said Skowron of the experience: "I was miserable," he recalled in Bombers: An Oral History of the New York Yankees, recorded by Richard Lally. "Twelve years I was with New York, three in the minors, nine in the majors. I loved those guys and it killed me to beat them. My uniform might have said Los Angeles, but in my heart I was always a Yankee."

Through 2011, Skowron is the last position player for different consecutive World Series champions.

After the 1963 season, Skowron's contract was sold to the Washington Senators, and midway through the 1964 season, he was dealt to the Chicago White Sox. He hit 18 homers for the Sox in 1965 but had lost his job to first baseman Tommy McCraw by 1967 and was traded to the California Angels, with whom he ended his big league career.

Overall Skowron hit .282 with 211 home runs and 888 RBI. He batted .293 with 8 homers and 29 RBI in 39 World Series games and was a member of five World Champion clubs. The most similar player, according to similarity scores, was his contemporary Bill White.

Following his playing days Skowron owned a bar in Cicero, Illinois. He later worked in the White Sox community relations department, making personal appearances for the club. He died in 2012 of congestive heart failure following a long battle with cancer.