Note: This page links to former major league pitcher Steve Barber. For the pitcher of the same name who played from 1970 to 1971, click here. 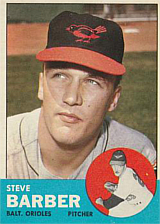 "It [Barber's sinker] felt like you were hitting a ball made of iron. Your hands would remember it the next day. And if you hit it early in the season on a cold day, you'd remember it all year." - Elrod Hendricks

Hard-throwing pitcher Steve Barber signed with the Baltimore Orioles as an 18-year-old and spent three years playing Class D ball. He made his big league debut with the O's in 1960 and was a mainstay in the club's rotation for the next seven and a half seasons. Part of a young Orioles pitching staff that included Milt Pappas, Jack Fisher and Chuck Estrada, Barber won 10 games as a rookie, then went 18-12 with a 3.33 ERA in his sophomore season. He had his best season in 1963, winning 20 games and making the All-Star team for the first time. Barber began the 1966 season strong, going 10-3 with a 1.96 ERA in the first half, and made the All-Star team again. He struggled in the second half, being slowed by tendinitis and appearing in just 7 games. The Orioles went on to win the World Series that year, but Barber did not pitch in the Series.

Steve bounced back in 1967 and began the year strong, pitching eight plus innings of no-hit ball against the California Angels in his first start of the season before giving up a lone hit to Jim Fregosi in the ninth. Two starts later, on April 30, he combined with teammate Stu Miller to pitch a no-hitter against the Detroit Tigers. However, the O's lost the game 2-1 because of Miller's wild pitch, followed by an error in the ninth inning. By the middle of the 1967 campaign, Barber, at age 29, was the oldest man in the young Baltimore rotation that featured Dave McNally and future Hall of Famer Jim Palmer. He was traded to the New York Yankees and spent the last seven years of his big league career playing for six different clubs, mostly out of the bullpen.

After his playing days, he was a school bus driver for children with disabilities in Clark County, NV. In 1988, he was inducted into the Baltimore Orioles Hall of Fame. Steve died of pneumonia two weeks before his 69th birthday.