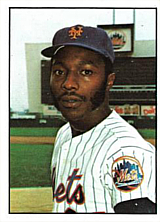 John Milner hit ten grand slams over twelve seasons with the New York Mets, Pittsburgh Pirates, and Montreal Expos. He earned the nickname "The Hammer" because he was likened to a left-handed Hank Aaron. Milner's best position was first base but he played almost as often in left field. He played from 1971 through 1982.

In 1985, after his playing career ended, Milner admitted to cocaine use. His cousin, Eddie Milner, also played in the bigs and battled substance abuse. John died of cancer in 2000 at the age of 50.