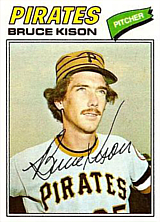 Pitcher Bruce Kison was a key member of the Pittsburgh Pirates for nine seasons, primarily as a starter, but never won more than 14 games in a season. He had a reputation as a beanball pitcher, but was troubled by blisters for most of his career. After he hit Mike Schmidt in a game in the mid-1970s, Schmidt yelled at him that he'd come out and get him if he did it again, to which Kison replied "why wait?".

After being drafted by the Pirates in the 14th round of the 1968 amateur draft, Kison reached the majors in 1971, taking the rotation spot of Bob Moose, who was serving in the military. He was 6-5 as a rookie but went on to star in the postseason that year, going 2-0 and not allowing an earned run in three relief outings as the Pirates went on the win the World Series. He was the winning pitcher in the first night game in Series history, on October 13th, and also set a World Series record by hitting three batters in that game. He capped the year by getting married on the same day the Pirates clinched the championship.

Kison had his best year with the Pirates in 1976, when he went 14-9 with a 3.08 ERA. He threw a pair of one-hitters during his big league career. He pitched in the National League Championship Series four times while with the Pirates, posting an impressive 3-0 record and 0.57 ERA in NLCS play. He was not always dominant in the postseason, though. He started Game 1 of the 1979 World Series against the Baltimore Orioles, but was chased after only one third of an inning, having allowed 3 hits and 2 walks and thrown a wild pitch; one of the hits was a two-run homer by Doug DeCinces and the Pirates were down 5-0 when he was replaced by Jim Rooker. That proved to be his last game with Pittsburgh as he was not used again in the Series, then signed a free agent contract with the California Angels after the season.

In 1989, Kison played for the Bradenton Explorers of the Senior Professional Baseball Association and was 2-3 with a 4.53 ERA for the club.

Following his playing days, Kison was a Kansas City Royals coach from 1992 to 1998 and a member of the 1999 Baltimore Orioles staff. In June 2007, he was named bullpen coach of the Orioles when Dave Trembley was named interim manager following the firing of Sam Perlozzo. He also scouted for the Orioles.