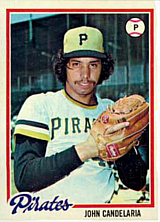 “Life is to enjoy. It’s a mystery to be lived, not a problem to be solved." - John Candelaria, to Sports Illustrated, 1982

John Candelaria won 177 games over 19 years in the majors, spent mostly with the Pittsburgh Pirates.

Candelaria took a break from baseball to play basketball and was slated to be on the Puerto Rican basketball team for the 1972 Olympics (his parents are both from Puerto Rico) before deciding he could make it to the big time quicker in baseball. He had the scoring record in basketball at the high school Kareem Abdul-Jabbar had attended and was second to the NBA great in rebounds. Selected by the Pirates in the second round of the 1972 amateur draft (the scout was Dutch Deutsch, Candelaria began his pro career the following year with the Charleston Pirates, going 10-2 in 18 games. After starting the 1975 season with the Triple A Charleston Charlies and going 7-1 with a 1.77 ERA, he was brought up to the majors. He went 8-6 with a 2.76 ERA in 18 starts in his rookie campaign and struck out 14 in Game 3 of the NLCS, which the Pirates eventually lost in extra innings. The next season, he went 16-7 and threw a no-hitter against the Los Angeles Dodgers on August 9th. Candelaria had his finest season in 1977, winning 20 games while pacing the National League with a 2.34 ERA. He was an All-Star for the only time in his career but finished fifth in Cy Young Award voting behind a quartet of other 20-game winners (Steve Carlton, Tommy John, Rick Reuschel, and Tom Seaver).

After a subpar 1978 season, he won a team-high 14 games for the Pirates in 1979 as the club won the NL East. He gave up 2 earned runs in 7 innings of work in Game 1 of the NLCS and then was 1-1 in two starts in the World Series, as Pittsburgh won the crown over the Baltimore Orioles in seven games. After missing most of the 1981 season with an arm injury, Candelaria won at least a dozen games in each of the next three years. Moved to the bullpen in 1985 (for which he called team GM Harding Peterson a "bozo"), he saved 9 games for the Pirates before being traded to the California Angels in early August. Moved back to the rotation by the Angels, he went 7-3 in 13 starts to end the season. He went 10-2 the following summer for California and made a pair of starts in the ALCS, which his team lost to the Boston Red Sox.

Late in the 1987 season, Candelaria was dealt to the New York Mets, for whom he went 2-0 in 3 starts. He became a free agent following the season and, after spending part of the offseason in an alcohol treatment center, signed with the crosstown New York Yankees. He won 13 games for the Yankees in 1988 before being traded to the Montreal Expos in 1989. Following stints with the Minnesota Twins, Toronto Blue Jays, and Los Angeles Dodgers, he ended his career back with the Pirates in 1993, going 0-3 in 24 relief appearances.