Home of the Chicago White Sox, 1991 to present 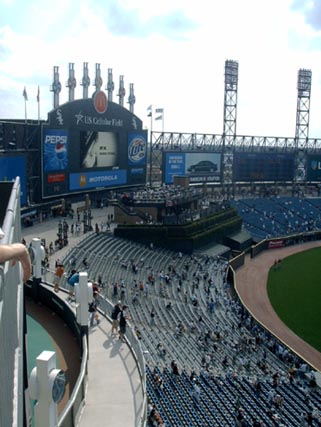 Debuted in 1991 as the new home of the Chicago White Sox, Guaranteed Rate Field (then known as "New" Comiskey Park and later as U.S. Cellular Field) was built across 35th Street from its predecessor and namesake, the original Comiskey Park.

Originally, the park was a smash hit, as Hall of Fame manager Sparky Anderson noted, "everyone's going to want one of these." He was only partially correct. Though Comiskey Park was the first of the wave of new ballparks debuted in the early and mid-1990s, it did not remain the industry standard for more than a few months. In 1992, the Baltimore Orioles unveiled Oriole Park at Camden Yards, and its "retro" features soon became all the rage, and the model which followers such as PNC Park or Ameriquest Field would seek to replicate.

The excitement of the new park and the winning product on the field contributed to the early success of the park. In its first season, the White Sox attracted 2,934,154 fans, setting a franchise record for attendance that still stands today. In 1993, it saw its first taste of October baseball, as the White Sox won the American League West title and hosted Games 1,2, and 6 of the ALCS - all losses to the eventual World Champion Toronto Blue Jays. 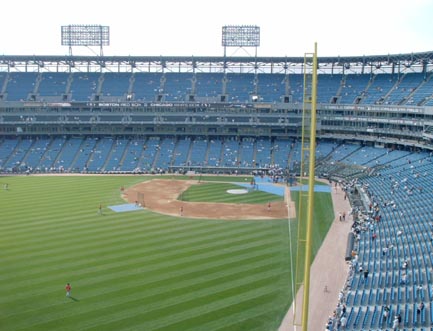 The 1994 player's strike, lack of success on the field, and fading public opinion of the park all led to a downfall in the team's attendance. The park was soon labeled as a "Ball Mall" and a sterile, unfriendly environment. Everything was criticized, fairly or unfairly; from the giant, expressway-sized billboards that lined the outfield concourse, to the steepness of the upper deck (despite the fact that upper deck in Cleveland's Jacobs Field is just as steep). Comiskey Park hosted post-season baseball again in 2000. The White Sox lost both Games 1 and 2 in front of their home crowd en route to a sweep at the feet of the Seattle Mariners.

The White Sox finally addressed the concerns about the park with a number of renovations, starting in 2001 and continuing until today. Many changes have occurred, the most striking including: 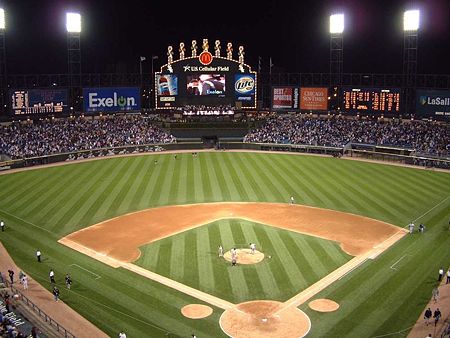 On January 31, 2003, the White Sox announced they had sold the naming rights of the park to U.S. Cellular (a mobile telephone company). The park made its debut as "The Cell", as it has become known in Chicago, on April 4, 2003 in a 5-2 win over the Detroit Tigers (the same team that helped open the park 12 years earlier). On July 15, 2003, U.S. Cellular Field hosted the All-Star Game for the first time in the park's history; it was the first time the game had been held on the South Side since 1983. Two years later, the park again played host to October baseball, as the 2005 White Sox marched to the franchise's first World Championship since 1917. The park hosted Games 1 and 2 of the ALDS, ALCS, and World Series. The White Sox went 7-1 in the playoffs, winning their first home playoff game since 1959 in their 14-2 rout of the Boston Red Sox in Game 1 of the ALDS.

On October 31, 2016, the park changed names again when its naming rights were bought by "Guaranteed Rate", a residential mortgage company. On July 22, 2019, the ballpark became the first one in the majors to install netting from foul pole to foul pole to protect fans from errant foul balls and flying bats. The White Sox had decided to proceed with the installation during the All-Star break following a number of well-publicized incidents of spectators being hurt around the majors, including one that sent a female fan to hospital at the ballpark in June.