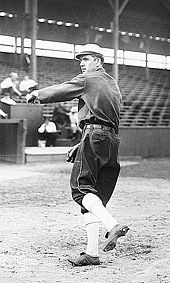 Doc White had a thirteen-year career in the majors with some excellent years. In 1902 he led the league in strikeouts per nine innings, and from 1903 to 1906 he was always in the top four in the league in ERA (leading the league in 1906), and in 1907 he led the league in victories with 27. He had a good fastball, but also an excellent sinker and spitball mixed with an occasional change-up, using smarts as much as raw speed to keep opposing batters off their stride.

A rail-thin 6'1" 150, he grew up in a prosperous family in Washington, DC and was urged to study medicine after he graduated from Central High. He enrolled at Georgetown University where he also played baseball. Some good pitching performances earned him a spot on the Fleishmann's Mountain Athletic Club in 1900, which was a powerful semi-pro team of the time. This is where he was spotted by centerfielder Roy Thomas of the Philadelphia Phillies who urged his team to sign him. White, known as Harry White at that time, went straight to the majors, pitching 14 games in 1901. In 1902, he went 16-20 for a poor Phillies team but finished second in the National League with 185 strikeouts. On July 21, he became the first pitcher since the mound was pushed back to 60' 6" to strike out four batters in one inning. During this time, he was completing his studies, and earned his dentistry degree in 1902, opening a practice in his hometown in the off-season. That earned him the nickname Doc, by which he is best known to this day.

In 1903, the American League's Chicago White Sox offered him a large raise to jump to their team. The Phillies then got into a bidding war to keep their young star pitcher, but the peace settlement that was reached shortly thereafter between the two leagues specified that he was now the property of the White Sox. He won 17 games in 1903, with a 2.13 ERA, the fourth-best in the AL. On September 6, he pitched a 10-inning one-hitter against the Cleveland Naps. The team became pennant contenders in 1904, with White winning 16 games with a sparkling 1.78 ERA. That year, he posted a remarkable streak of five consecutive shutouts as Chicago was in the heat of the pennant race. His 45-inning scoreless streak held as a Major League record until eclipsed in controversial circumstances by Don Drysdale in 1968. The streak ended on October 2 when the New York Highlanders managed a first-inning run off White in a game the Sox won 7-1. That day, White also pitched the second game of the doubleheader, filling in for ailing teammate Frank Owen and lost 6-3 as the pennant went to the Boston Americans.

Doc White went 17-13, 1.76 in 1905, then won 18 games for the pennant-winning 1906 team otherwise known as the "Hitless Wonders". He also had the best ERA in the league at 1.52 that year, but lost Game 2 of the 1906 World Series by the score of 7-1 to the Chicago Cubs. In his next World Series appearance, in Game 5, he recorded the first save in the history of the World Series (figured retroactively). He relieved starter Ed Walsh in the seventh inning with one on and nobody out and the White Sox leading the Cubs 8-6; he pitched scoreless ball the rest of the way to preserve the victory. He then started and won Game 6 the next day, coasting to an 8-3 Series-clinching victory.

Doc White had a career year in 1907, recording 27 wins with a 2.26 ERA and issuing only 38 walks in 291 innings. The season included a 65 ⅓ inning streak without a single walk which ended on September 11 with an intentional pass to the mediocre Tom Jones to load the bases in order to get out of a jam. The strategy worked, and White's streak stood as an AL record for 55 years. In 1908, he won 18 games in a season in which teammate Ed Walsh set a number of AL pitching records; however, it was White who started on the season's last day on October 6, with the pennant hanging in the balance. Working on a single day's rest, he was pummelled by the Detroit Tigers in the first inning, being saddled with a 7-0 loss. He started slowing down beginning in 1909, going only 11-9 in 177 innings. He won 15 games for the last time in 1910, and then his ERA began climbing steadily over the remainder of his career.

In addition to his playing career, he was a fill-in umpire in two games, one in the National League in 1902 and the other in the American League in 1903.

White played his last major league game in the 1913 season, although he pitched in the Pacific Coast League in both 1914 and 1915. The latter season, he was interim manager of the Vernon Tigers, and held front office jobs for various minor league teams from 1916 to 1920. He had left aside dentistry a number of years before, and even had a short vaudeville career in 1910-1911. White would later coach baseball and basketball at the University of Maryland and at Wilson Teachers College (the future University of the District of Columbia), while also teaching physical education at his old high school. He retired in 1949, but was still alive in 1968 when Don Drysdale broke his old shutout record, although too ill to give media interviews. He died over the following winter in Silver Spring, MD.