The White Sox won the first official "major league" AL game on April 24th, defeating the Cleveland Blues 8-2. Four days later, they hit 24 singles against the Blues, and on May 1st, the club hit a pair of grand slams in a 19-9 win against the Detroit Tigers. Earl Moore of Cleveland hurled a no-hitter against the Sox on May 9th, but Chicago still managed to prevail 4-2 in that contest.

The White Sox led the circuit for most of the year and moved into first place for good on July 18th, ultimately capturing the inaugural AL pennant over the Boston Americans by four games. Manager Griffith also starred for the club on the mound, winning 24 games and tying for the league lead with 7 shutouts, and Roy Patterson also won 20 games. Despite playing in the Dead Ball Era, the 1901 Sox averaged nearly 6 runs scored per game and were shut out only twice in the season. They also had the AL's top three base stealers: Frank Isbell (52), Mertes (46), and Fielder Jones (38).

In an August 21st road game against the Washington Senators, two Sox players were suspended following an altercation with an umpire. Sox shortstop Frank Shugart punched umpire John Haskell after a disputed ball four call. Pitcher Jack Katoll then beaned Haskell in the leg during the fight. The police intervened and both players were arrested. Katoll was suspended for 11 games and Shugart for 23, and Shugart was blacklisted from baseball after the season.

In addition to winning a league title, the White Sox also outdrew their established National League rival, the Chicago Orphans, at the ticket booths by well over 100,000 fans.

Following the season, the Sox split a four-game series against an All-Star team led by Nap Lajoie. 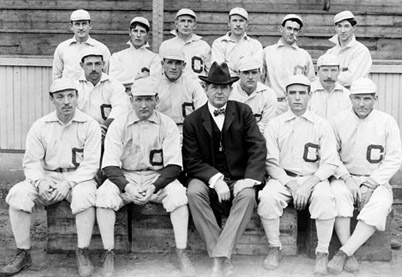