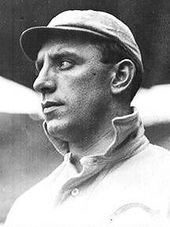 Frank Smith was a mainstay of the great pitching staff assembled by the Chicago White Sox in the 1900s. He was given the unusual nickname of Piano Mover because of his off-season job as a furniture mover in Pittsburgh, PA, coupled with his boast that he could carry a piano up four flights of stairs without pausing for breath. He was of stocky build, at 5'11" 194 lb. and tremendously strong, making his boast believable.

Of German ancestry - his father changed his last name from Schmidt - Frank Smith was born and grew up in Pittsburgh and attended Grove City College before making his debut for a semi-pro team in Erie, PA in 1900. He pitched for the Raleigh Senators of the Virginia-North Carolina League in 1901, and then Birmingham of the Southern Association in 1902 and 1903. He was signed by the Chicago White Sox for the 1904 season. He won 16 games as a rookie, thanks to a recently-acquired spitball, to go along with his sinker and fastball. He learned the spitball from minor league prospect Elmer Stricklett, who also taught the pitch to the great Ed Walsh. Smith's spitter was described as a knuckleball moving at the speed of a good fastball, making it tremendously effective, but hard to control. It worked well for him in 1905, when he went 19-13 with a 2.13 ERA. On September 6, he pitched a 15-0 no-hitter against the Detroit Tigers, the fifth in the history of the American League and one of the most lop-sided in history.

In 1906, the White Sox rode their superior pitching to a World Series triumph over the crosstown Chicago Cubs, but Smith was largely a by-stander. Having trouble controling his spitball, he made only 13 starts with a 5-5 record and was not used in the World Series. He came back with a vengeance in 1907, going 23-10 with 139 strikeouts as Chicago fell just short of repeating as pennant-winners. In 1908, Smith came into conflict with team owner Charles Comiskey and left the team on June 14 after a heated argument with his boss over his lack of control. The Sox were in first place at the time, but had trouble keeping up while Smith was away. He finally agreed to rejoin the team in late July and finished with a record of 16-17, 2.03, sharing most of the mound duty down the stretch with Walsh. On September 13, he pitched a second no-hitter, victimizing the Philadelphia Athletics; there was no offensive barrage to help him this time: he won the game 1-0 in the bottom of the ninth when Freddy Parent reached for a pitch on an attempted intentional walk and tapped it to second baseman Scotty Barr, allowing Frank Isbell to just beat a close play at home for the game's only run. Smith was the only man to pitch two no-hitters for the White Sox until Mark Buehrle repeated the feat a century later. However, the White Sox lost the pennant on the final day of the season when a tired Doc White was roughed up by the Detroit Tigers while a well-rested Smith watched from the dugout after feuding with manager Fielder Jones.

In 1909, with his battery-mate Billy Sullivan taking over as manager, Smith had a great season, pitching 365 innings with a 25-17 record, a 1.80 ERA and 177 strikeouts. He began 1910 by pitching a one-hitter against the St. Louis Browns on opening day, but then slowed down. He was 4-9, 2.03 when Chicago traded him to the Boston Red Sox on August 11 for Harry Lord and Amby McConnell. He went 1-2 in only 4 games the rest of the way, but the Red Sox were counting on him to bounce back in 1911. It wasn't to be. He started only one game and pitched poorly before being sold to the Cincinnati Reds, then was 10-14 with a poor 3.98 ERA for his new team. In 1912, he was 1-1 in seven games for the Reds, before being sold to the Montreal Royals of the International League. He moved to the newly-formed Federal League in 1914, pitching for the Baltimore Terrapins, and was a decent 10-8, 2.99. He started 1915 with a 4-4 mark, but with a terrible 4.67 ERA for Baltimore and finished the season with the Brooklyn Tip Tops, posting a 5-2 mark with a league-average 3.14 ERA in 15 games, mostly in relief.

Frank Smith retired from baseball at that point and moved back to Pittsburgh, returning to the furniture business. He died there in 1952. Overall, he was 139-111 with a 2.59 in 11 seasons, with all of his best years spent with the White Sox. He was a workhorse in his late 20s, perhaps explaining why he faded quickly once he hit the age of 30.