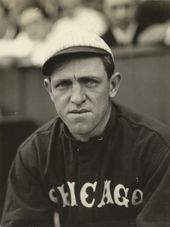 Harry Lord was a third baseman for eleven years (1906-1915), one in college (1905), nine in the Majors (1907-1915) and two in the minors (1906-1907). He was born on March 8, 1882, in Porter, ME. Historians recording the life battles and career of Harry rise to remark that this noted athlete was literally kicked into professional baseball. Picture such a fate at this stage of the game, yet this version of his early life was verified in an oral interview.

From the time Donald (Lord) was old enough to pound the legs of the dining-room table with his choo-choo engine and to put his chubby little hands in the coal-bucket, then run and slap them on the kalsomined wall of the sitting-room, he always wanted to be a traveling man. When other boys were reciting "Jes' before Christmas I'm as good as good kin be," or going out and selling soap wrappers to help along the orphans' home, Harry was packing and unpacking his father's old sample cases, dreaming of the time he, too, would go out on the road, gather a crowd around him in Bill Hickman's Broadway Emporium and tell the funny story about the deaf lady in the upper berth until they laughed themselves sore and invited him to spend Sunday with them.

It seemed to him that to be able to ride up to the Hoffman House in Bingburg in a 'bus, walk up to the clerk and, without ever inquiring the price, say careless like, flicking off the ashes, "Gimme the best you got," was better than being President of the United States and having to sit around in your coat all the time and having to fix up for dinner whether you had company or not.

But he managed to curb his ambition until he got to college and there he met a little cherry-cheeked girl, who, Harry soon discovered, all alone, unassisted and unaided, made the world go 'round. Until that time he had thought Archimedes or Joshua was the man at the switch, never once suspecting that a little girl in Maine was the engineer. When she explained to him that she would have to have a kitchen and chickens in the back yard to go on with her work, Harry saw that it would be a long while before he could get a chance to tell funny stories in Bingburg and so he went into baseball as the quickest way of getting oil for the terrestrial machinery.

His first professional engagement was at Kezar Falls, ME. He attended Bates College, where he graduated in 1908 and pitched for the baseball team and was married to the cherry cheeked co-ed shortly thereafter who bore him a son and a daughter.

He broke into Organized Baseball at age 24 in 1906 with Worcester in the New England League and the next year moved up to Providence in the Eastern League. His performance there caught the attention of the Boston Americans and, at 26 years of age, he broke into the big leagues on September 25, 1907, with Boston. He played for Boston (1907-1910). On May 30, 1908, Washington's Jerry Freeman's single was the only hit allowed by Boston's Cy Young. Lord had four hits to back Cy's pitching. On April 21, 1909, Lord stole home on the front end of a triple steal in the bottom of the seventh, with Tris Speaker taking third and Doc Gessler taking second. The Sox won the game, 6-2. On June 30, 1910, the Philadelphia Athletics held a benefit for the widow and children of Mike "Doc" Powers, who had died a few days after the team opened Shibe Park in 1909. Players from the Washington, New York and Boston AL teams took part in a six-inning game against the A's, and also in pre-game contests before 12,000 fans. In one of these contests Lord was timed from home to first in 3.4 seconds. When on July 10, 1910, a Walter Johnson fastball broke Lord's finger, the stellar play of his substitute Clyde Engle made Lord expendable. In 1910, the Red Sox fielded ten men who had been or would become MLB managers - no other team in history as ever had more. Lord was joined in this feat by Bill Carrigan, Gavvy Cravath, Doc Gessler, Deacon McGuire, Tris Speaker, Jake Stahl, Bob Unglaub, Heinie Wagner and Cy Young. He was traded to the Chicago White Sox on August 9, 1910, with Amby McConnell to the Chicago White Sox for Frank Smith, whose best days were behind him, and Billy Purtell, and became the one threat in the weak White Sox lineup, hitting .297 through the end of the year. The Sox still finished last in hitting, slugging and homers, however. In 1911, his best year in MLB, he had 180 Hits, 103 Runs, 18 Doubles, 18 Triples, 3 Home Runs, 61 RBI and 43 Stolen Bases at (.321/.364/.433) in 141 Games. On May 8, 1912, the White Sox beat the Washington Senators 7–6, snapping Walter Johnson's five-game win streak; Johnson gave up two 2-run home runs, one to Lord in the first and another to Ping Bodie in the fifth. He played for the Pale Hose until 1914 but then got into a salary squabble with owner Charlie Comiskey.

He held out on the Sox, returning for a few games only to demand his release, and disappeared again when Comiskey turned him down. Ten days later, the Buffalo Buffeds of the Federal League announced they had signed Lord, but he didn't show up there until the following year. When he reported to Chicago in 1915, he found himself blacklisted by mutual consent of the American and National League owners.

For the 1915 season, Buffalo changed its name from the Buffeds to the Blues. In light of what happened, the change was appropriate. The team faltered early and by June 1 was in the cellar. First to feel the heat was Manager Larry Schlafly, who "resigned" on June 4. He was replaced temporarily by catcher Walter Blair and then by Lord, who had joined the Blues only eight days before. Buffalo star Hal Chase and Lord were business associates and close friends. Once the managerial change was made, Chase, who had been slumping under Schafly, suddenly came to life. He batted .328 for the remainder of the 1915 season and led the Federal League in home runs with 17. Lord and Chase took them from the cellar to sixth place with a (59-48) record, but Lord never managed again in MLB nonetheless.

At times, Lord inspired his teammates with his hustle, earning him the White Sox captaincy; at other times, it seemed he didn't want to play. The two years he batted more than .310 (1909 and 1911), he followed with marks of .267. He excelled at stretching doubles into triples. But as a fielder, he was virtually immobile. In 1913, he set single-season American League records for fewest chances accepted (364) and fewest assists (221) by a third baseman in 150 or more games.

He was head coach of his alma mater, Bates College, in 1918.

After managing in the minors, he entered a number of business ventures in Portland, ME. His hobbies were "my son and my daughter". He died at age 64 on August 9, 1948 in Hospital in Westbrook, ME where he had been the last four months of his life and is buried at Riverside Cemetery in Kezar Falls, ME. Surviving him were his wife, his daughter and his son.