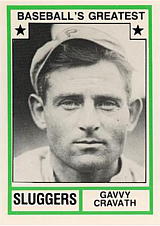 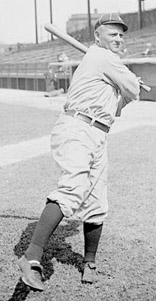 "In right field is the greatest offensive player on Pat Moran's roster. 'Cactus' Cravath is a slugger pure and simple - the greatest in the game today... Though no speed marvel, Cravath is one of the brainiest base runners in the country... Though 'Cactus' cannot cover ground like Whitted or Paskert, he is sure death on fly balls, and he gets more assists than any other right fielder in the league. The big fellow has an ideal temperament... A good-humored, helpful chap... Do you see any weakness here?" - an article called 'The Phillies' Underrated Outfield' in Sporting Life, May 20, 1916

Outfielder Gavvy Cravath was one of the game's first true blue home run sluggers. He played 11 seasons in the majors, leading the National League in home runs six times as well as quite a few offensive categories. He later managed a couple of seasons in the big leagues.

Cravath was the first big leaguer from the San Diego area to make good in the big leagues. First, he spent a significant portion of his career in top level minor leagues, primarily with the Pacific Coast League's Los Angeles Angels (with whom he was PCL MVP in 1907) and the American Association's Minneapolis Millers. He reached the majors with the Boston Red Sox in 1908 and seemed to be making good, batting .258 with 11 triples, when he was sold to the Chicago White Sox for the 1909 season. He played 23 games with the ChiSox and Washington Senators in 1909, batting only .161, before returning to the minors for several years. In 1910 and 1911, he won batting titles in the American Association and also led the circuit in homers. No one tracked RBI in the AA, or else he may have been the first Triple Crown winner in loop history.

The 1915 season was the best for Cravath and would be the best for the Phils for a long time. Gavvy hit 24 home runs, a new high for the century and three shy of Ned Williamson's record 27 with the Chicago White Stockings in 1884. He led the league in runs scored (89), homers, RBI (115), walks (86), on-base percentage (.393) and slugging percentage (.510), hitting .285 in adding 31 doubles. The Phils, on the strength of Cravath's bat and Pete Alexander's right arm, won their first pennant that season, going to the World Series for the first time (they would not return until the "Whiz Kids" season of 1950). The Phils were unable to topple the Boston Red Sox, Cravath batting just .125/.222/.313 in the five-game loss.

Gavvy's 119 career home runs were nearly enough to reach the all-time record of 138 by Roger Connor; before it was known Connor had the crown first, Cravath was often incorrectly recognized as the first home run king. His record would never have lasted since Babe Ruth passed everyone in 1921 and eventually hit 714. Cravath was the fastest player in major league history to reach 100 home runs (in 1,016 games) until he was surpassed by The Babe (who needed just 528 games).

Cravath later returned to the Phillies staff as a coach in 1923 and was a scout for the Minneapolis Millers. After his baseball days, he moved to southern California and became involved in the real estate market. He was elected a magistrate in Laguna Beach in 1927, serving 36 years in that role, and died of a heart ailment there at age 83 in 1963. Posthumously, he earned entrance into the San Diego Hall of Champions and the Philadelphia Baseball Wall of Fame.