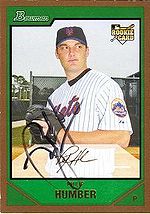 Pitcher Philip Humber was selected by the New York Yankees in the 29th round of the 2001 amateur draft, but did not sign, choosing to attend Rice University instead. As a freshman, he was 11-1 with a 2.77 ERA and 130 K in 111 IP. Baseball America picked him as a first-team freshman All-American and third-team All-American. He was the Western Athletic Conference freshman of the year, led the Conference in strikeouts and made the All-Conference team. Only Justin Verlander struck out more as a freshman that year. In the 2002 World University Championship, Humber pitched five scoreless innings in a win over Venezuela.

Philip was 11-3 with 138 K in 128 IP and a 3.30 ERA as a sophomore and again made the WAC All-Conference team. His string of 17 straight wins was snapped with the final games of the year. In the 2003 College World Series, he hit a College World Series record three straight batters against the University of Texas and was knocked out after 3 2/3 innings. In the finals against Stanford University, Humber only allowed five hits to a powerful offense featuring Ryan Garko and Carlos Quentin and pitched a complete game for the victory.

In 2004, Humber went 13-4, 2.27. He tied for 5th in NCAA Division I in victories and struck out 154 in 115 innings, the 4th-highest K total in NCAA Division I. He led the WAC in wins, was third in ERA and led in strikeouts but lost pitcher of the year honors to teammate Wade Townsend. Humber made All-Conference and Baseball America picked him for second-team All-American. The American Baseball Coaches Association and Collegiate Baseball magazine both made him a first-team All-American pick.

Overall, he had posted a 35-8 record with a 2.80 ERA and 422 strikeouts over his college career. Scouted by Dave Lottsfeldt, he was then selected by the New York Mets with the third overall pick in the first round of the 2004 amateur draft. He did not sign until the next January, inking a deal for $4.2 million guaranteed shortly before a new law would have made signing bonuses eligible for Social Security taxes. The hurler was then 2-6 with a 4.99 ERA for the St. Lucie Mets and 0-1, 6.75 for the Binghamton Mets before his season was cut short by right elbow surgery.

Humber was back in AAA in 2008, as a member of the starting rotation of the Rochester Red Wings. He went 10-8, 4.56 in 31 games, including 23 starts, and pitching the first two complete games of his professional career. He made five appearances in relief for the Twins, pitching 11 2/3 innings with a 4.63 ERA and no decisions. 2009 was more of the same: a 7-9 record with a 5.34 ERA for Rochester, coupled with 8 relatively ineffectual relief appearances at the major league level with no decisions and an even 8.00 ERA. With the luster pretty much worn off his prospect status, he became a free agent and signed with the Kansas City Royals after the season.

Philip Humber completed his fourth straight season in AAA in 2010, going 5-6 in 20 starts for the Omaha Royals. His ERA was back to his accustomed level, at 4.47 and he did record his first professional shutout. He notched his first major league decisions, going 2-1 over 8 games. His first win came on August 25th, when he pitched scoreless ball from the 9th through the 11th inning in a 4-3 win over the Detroit Tigers. After the season, the Royals placed him on waivers and he was claimed by the Oakland Athletics, but barely a month later, he was back on waivers, and this time the Chicago White Sox took a flyer on the former top prospect on January 18, 2011. He surprised everyone by making the White Sox's opening day roster and was inserted in the starting rotation after a couple of relief outings. He won his first major league game as a starter on April 9th, pitching 6 innings in a 4-2 win over the Tampa Bay Rays. On April 25th, he gave up only 1 hit over 7 innings against the New York Yankees as he combined with Chris Sale and Sergio Santos for a 2-0 shutout. He made 28 appearances that year - 26 of them starts -, going 9-9 with a 3.75 ERA in 163 innings. He missed the second half of August with an injury, and mad one rehabilitation start with the AAA Charlotte Knights on August 30th before returning to the Windy City.

On April 21, 2012, Humber tossed a perfect game against the Seattle Mariners at Safeco Field in his second start of the season. He needed only 96 pitches to put the M's away. It was the 20th regular season perfect game in major league history, and the third by a White Sox pitcher after Charlie Robertson and Mark Buehrle, as well as the first no-hitter of the 2012 season. Things could not have been more different in his follow-up start against the Boston Red Sox on April 26th; he walked the first batter of the game, Mike Aviles, and gave up two runs in the 1st, on his way to conceding a career-high 9 runs in 5 innings. He gave up a grand slam to Kevin Youkilis and a pair of homers to Jarrod Saltalamacchia as Boston won handily, 10-3. No one had allowed more runs in the start after a perfect game; the old record had been 8 runs by Catfish Hunter back in 1968. Humber summed up his outing thus: "This game will humble you, man." He continued to struggle over the next few weeks, and was only 3-4, 6.01 in 12 starts when he was placed on the disabled list in late June. He returned to action on July 17th, beating the Red Sox while allowing only 2 runs in 6 innings. This time Youkilis, who had since become a teammate, homered in support of his pitching effort. He hit a career low point on September 4th when he surrendered 8 runs while pitching only a third of an inning in a relief appearance against the Minnesota Twins; the White Sox went on to lose that game, 18-9. He thus finished the season with a record of 5-5 and a bloated 6.44 ERA.

He continued to struggle badly in 2013, after being claimed off waivers by the Houston Astros the previous November. He made 17 appearances on the mound, including 7 starts, but absolutely nothing went his way as he suffered 8 losses against no wins and his ERA rose even higher, to 7.90. He was sent down to AAA and pitched somewhat better with the Oklahoma City RedHawks, going 2-4, 4.68. In 2014, he moved to the Oakland Athletics chain but did not pitch at the major league level, spending the year mainly as a reliever with the AAA Sacramento River Cats. In 44 games, including 3 starts, he went 6-4, 3.65 with a save and 68 Ks in 69 innings.

In 2015, Humber moved across the Pacific to the Korea Baseball Organization, playing for the Kia Tigers. He was hit hard once again, going 3-3, 3.75 in 12 games, 11 of them starts. His performance had to be put in the context of a very hitter-friendly period in the KBO, when a slew of offensive records were broken. In 2016, he returned to the United States by signing a minor league contract with the San Diego Padres and was with them in spring training as a non-roster invitee. However he failed to make the team and opted to retire instead of returning to the minor leagues.