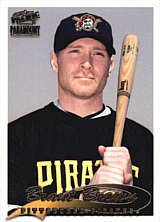 "[H]e's such a good athlete, he can do things out there [in the outfield] an ordinary guy can't do." - Billy Williams

“I said, ‘Brant Brown drops the ball,’ and I heard Ron Santo in my headset bellow out, ‘Oh, nooo!’ It was the kind of despair you’d associate with someone losing a member of their family. His call will live on in Cubs lore — in infamy, you could say, because it was such a tough loss.” - Pat Hughes, Chicago Cubs broadcaster for WGN-AM 720, remembering Brant's crucial error during the Cubs stretch run of 1998 in 2018

Brant Brown is perhaps best remembered for his gaffe on September 23, 1998. Sammy Sosa broke out of an 0 for 21 slump, hitting his 64th and 65th home runs, as the Cubs built a 7–0 lead over the Milwaukee Brewers. But Milwaukee fought back and scored 3 runs when Brown dropped a routine fly ball with the bases loaded and two out in the 9th. Rod Beck was on the mound when the Merkle–like error occurred (Fred Merkle's boner occurred exactly 90 years before). Milwaukee won the game, 8–7, and the Cubs remained tied for the wild card spot with the New York Mets. Though the Cubs would win the wild card, it would still be another 18 years before they won a World Series.

Brown had his best minor league seasons within the first two years of his signing: in his first season, he hit a respectable .274. The next year, he hit .342 with Class A Daytona and Double A Orlando. On June 15, 1996, at the age of 24, he saw his first glimpse of the majors with the Chicago Cubs. It was a success - he hit .304 in 69 at bats. On June 18, Brown hit three home runs in four at-bats, filling in for Mark Grace. On June 22, he got five hits in one game, including a 2-run home run in the 16th inning. After his gaffe, his career did not take off into the stratosphere. He bounced around the league, playing with multiple teams - he was dealt by the Cubs to the Pittsburgh Pirates for Jon Lieber following '98 and later saw time in the Florida Marlins, St. Louis Cardinals and Milwaukee Brewers organizations. On May 9, 1999, Brown hit a 3-run inside-the-park home run for the Pirates, then a month later, on June 9, he collected 5 hits in one game. He did return to the Cubs in 2000, where he played his final major league game on August 29, 2000. The last Brown saw of professional baseball was in 2003 with the Schaumburg Flyers, an independent league team. Brown's uniform number, except for a part of his final season (where it was 35), was always 37.

Brown was a coach of the Bakersfield Blaze in 2007 and 2008, the Frisco RoughRiders in 2009-2011 [1], and Round Rock Express in 2012. In 2018, in an unusual arrangement, he was hired as assistant hitting coach of the Los Angeles Dodgers, sharing the position with Luis Ortiz concurrently with that of minor league hitting coordinator. The two were expected to rotate between the major league club and its minor league affiliates. After the season, he was retained as a coach, but as a supernumerary one with the unusual title of "hitting strategist". In 2020, he was named co-hitting coach with hitting guru Robert Van Scoyoc. He currently resides in Bakersfield, CA.