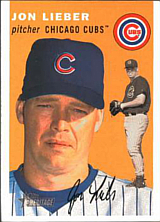 Jon Lieber went 20-6 pitching for the Chicago Cubs in 2001 and made the All-Star team for the only time in his career. He was the last twenty-game winner for the Cubs until Jake Arrieta in 2015. Like later Cubs pitcher Kyle Hendricks, Lieber was an extremely quick worker; his complete games frequently lasted little over two hours. On May 24, 2001, he shut out the Cincinnati Reds on just 78 pitches, the fewest ever recorded by a Cubs pitcher in a shutout.

He underwent Tommy John surgery after the 2002 season, missed all of 2003, then came back to win 14 games for the New York Yankees in 2004. He went 1-1 in the ALCS that season, the year when the Boston Red Sox came back from being down three games to none to eliminate the Yankees and win their first World Series since 1918. He pitched over 200 innings for the Philadelphia Phillies in 2005. However, his performance went down after that, and he retired after returning to the Cubs as a reliever in 2008.

On September 20, 1999, Mark McGwire commented that Lieber had the best slider he had ever seen.