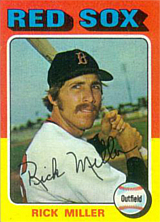 Rick Miller played 15 seasons in the major leagues, mostly with the Boston Red Sox. Considered a good defensive outfielder, he won a Gold Glove in 1978 when he was with the California Angels.

Miller was named manager of the Nashua Pride of the independent Can-Am Association for the 2008 season. He managed the New Bedford Bay Sox of the New England Collegiate Baseball League in 2012 and 2013.