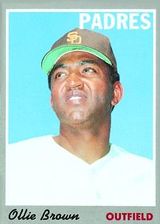 “I think Brown has the best throwing arm in the business... If I were a fan, I’d come to the ballpark early just to see him throw.” - Preston Gomez, The Sporting News, August 9, 1969

Ollie Brown played 13 seasons in the big leagues, primarily as a right fielder. In his best season with the bat, he hit .292 with 23 home runs with 89 RBI for the 1970 San Diego Padres, a team which hit .246 overall while playing in a pitcher's park. Ollie had a cannon of an arm in right field, which explains why he was also used as a pitcher in the minors. Later in his career, he developed into a top pinch hitter with the Philadelphia Phillies of the late 1970s.

Ollie was born in Tuscaloosa, AL, which was also the birthplace of a number of other contemporary major leaguers such as George Foster, Butch Hobson and Lee Maye. Ollie attended high school in Long Beach, CA and broke into the minors at age 18, improving as he moved up the chain. Brown spent 1962 as an outfielder for the Salem Rebels and Decatur Commodores. Returning to Decatur in 1963, Brown spent 12 games in the outfield, but also started 21 games in the pitching rotation. On August 13th, he threw a no-hitter against the Wisconsin Rapids Senators, winning 8-0. In 1964, with the Fresno Giants, he hit 40 home runs, drove in 133 runs and batted .329, winning California League MVP honors. That performance earned him a move up to Triple A ball, where he hit 27 home runs for Tacoma.

Olliee got his first shot at the majors in September 1965 with the Giants, a team which already had Willie Mays, Jesus Alou, Matty Alou, Len Gabrielson and Ken Henderson in the outfield. Despite that, Ollie made the team the following season and got substantial playing time in 1966 and 1967. He was down in the minors for part of 1966 and 1968. He was the first pick of the San Diego Padres in the 1968 expansion draft, and became a regular for the Padres from 1969 to 1971. Given regular playing time, he hit over 20 homers in both of the Padres' first two seasons. 1972 found him with three separate teams - the Padres, the Oakland A's and the Milwaukee Brewers - before he spent 1973 with the Brewers. In 1974, he was with two teams - the Houston Astros and Philadelphia Phillies - before closing out his career from 1975 to 1977 with the Phillies, a team which won its division in 1976 and 1977. With the 1975 Phillies, he posted a line of .303/.369/.510 in 161 plate appearances.

Ollie was the older brother of Oscar Brown. Another brother, Willie, played in the NFL with the Rams and Eagles.

"Downtown" Ollie Brown died from complications of mesothelioma in April 2015. He was 71.