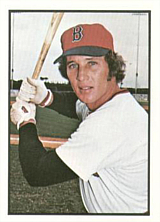 Butch Hobson played eight years in the big leagues, mostly with the Boston Red Sox, and managed for three. He once hit 30 home runs in a season and another time hit 28. He was also known as a terrible fielder at third base, posting a fielding percentage of .899 in 1978 thanks to a whopping 43 errors, most of them on wild throws. He was the last player to field below .900 in over 100 games until Ryan Braun fielded .895 with the 2007 Milwaukee Brewers. He also led the American League in strikeouts in 1977 with 162, a result of his all-or-nothing approach at the plate.

In 1989, Hobson played for the Winter Haven Super Sox of the Senior Professional Baseball Association. Hobson batted .223 with 2 home runs and 16 RBI in 48 games.

He managed the New Britain Red Sox in 1989-1990 and the Pawtucket Red Sox in 1991. Butch was the manager of the Red Sox from 1992 through 1994; the Red Sox posted a .472 winning percentage under his command. In 1996, after a stint as manager of the independent Mobile BaySharks, he was arrested for possession of cocaine while manager of the Scranton/Wilkes-Barre Red Barons. He was immediately fired and only found his next job in professional baseball in 1999. Hobson bounced back, though, and in 2000, became manager of the independent Nashua Pride, staying until 2007, then later moved on to the Southern Maryland Blue Crabs and the Lancaster Barnstormers from 2011-2016.

In 2017, he got back into organized baseball as manager of the Kane County Cougars of the Midwest League, but the next year, he was back in the indy leagues, staying in the Chicago, IL area as skipper of the newly-formed Chicago Dogs. He got into the news in mid-August, when, displeased over a checked swing call in a game against the Sioux City Explorers, he was ejected. Instead of leaving the ballpark, though, he grabbed his player's bat and pretended to hit a home run and then circled the bases as the fans cheered. Two weeks earlier, in another meltdown, he had torn the third base bag off its moorings and handed it over to a fan.