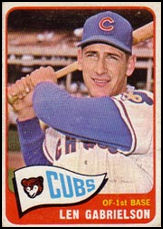 Signed by the Milwaukee Braves in 1959, Gabrielson began his pro career with the Jacksonville Braves in 1960, hitting .279 with 10 home runs for the team. This earned him a September call-up to Milwaukee, and he went 0-for-3 over 4 games in his first taste of big league ball. He spent 1961 with the Louisville Colonels, posting a .278 average while hitting 13 homers, and split the next year between Louisville and the Toronto Maple Leafs, hitting .275 between the two clubs. He spent the early part of 1963 in the majors with Milwaukee but hit only .194 through May and was soon back in the minors. After several months with the Denver Bears, he returned to the Braves in September and ended the year with a .217 average in 46 big league appearances.

Gabrielson started 1964 back with Milwaukee, hitting .184 in 24 games before being traded to the Chicago Cubs in early June for Merritt Ranew. After the Cubs dealt Lou Brock away later that month, Len saw significant playing time in rightfield, and he ended the year with a .239 average and 5 home runs. In May 1965, the Cubs dealt him to the San Francisco Giants as part of a five-player trade, and he soon became the Giants regular leftfielder. Overall, he posted a career-best .293 average that year. However, after hitting just .217 in 1966, he was traded to the California Angels for Norm Siebern.

Gabrielson strugged to find playing time for the Angels in 1967 and after just 11 games for the team, he was traded across town to the Los Angeles Dodgers for Johnny Werhas. He had his best year in the majors in 1968, when he hit .270 with a team-best 10 home runs. While 10 homers was the lowest total for a team leader in the time since the Dodgers came to Los Angeles, that season was considered the "Year of the Pitcher", and his batting average was well above the team average of .230 and the league mark of 243. He saw decreasing playing time over the next two years, and his playing career ended in 1970 at age 30.

Gabrielson is the son of Len Gabrielson, Sr., a first baseman who appeared in the majors in 1939, the year before Len Jr. was born.