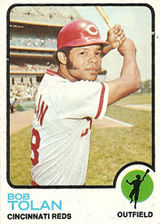 Bobby Tolan played 13 seasons in the National League. He led the circuit in stolen bases in 1970 and appeared in four World Series before he was 27 years old.

The nephew of Olympic gold medalist Eddie Tolan, Tolan began his career in the Pittsburgh Pirates organization with the Reno Silver Sox in 1963. After one season in the Pirates farm system, he was drafted by the St. Louis Cardinals and reached the big leagues in 1965. By 1967, he established himself as the team's fourth outfielder, and he played in the World Series with the club in 1967 and 1968.

Tolan was traded to the Cincinnati Reds as part of the deal that brought Vada Pinson to St. Louis prior to the 1969 season. Batting second for the Reds behind Pete Rose, he hit .305 with 21 homers and 93 RBI. The next season, he hit .316, led the National League with 57 stolen bases, and scored 112 runs. He also starred in the NLCS, homering and scoring three times in Game 2 and driving in the game-winning run in Game 3. In Game 2 of the World Series, he added another homer, but the Reds fell to the Baltimore Orioles.

Prior to the 1971 campaign, Tolan injured his Achilles tendon and missed the entire season. He bounced back in 1972, hitting .283 with 42 steals and 88 runs scored, and was named NL Comeback Player of the Year. That fall, he played in the World Series for the fourth and final time in his career. After his average dropped to .206 in 1973, he was dealt to the San Diego Padres following the season.

Tolan almost became the test case against the reserve clause. He and Sparky Lyle were both playing the 1974 season without signing contracts. The San Diego Padres and New York Yankees respectively renewed their contracts under the reserve clause while the players held out for a better contract. Lyle signed a two-year deal on the last day of the season (for 1974-1975). Tolan didn't sign and the Player's Union filed two grievances on October 17th. The first was for a clarification of the reserve clause, the second was for Tolan, and requested his free agency, on the grounds that the reserve clause was only for one year. On December 9th, the Padres announced an agreement with Tolan for two years (1974-1975), before an arbitrator could make a ruling. Both grievances were dropped.

After stints with the Philadelphia Phillies and Pittsburgh Pirates, Tolan played for the Nankai Hawks in Japan in 1978. He started 1979 playing for the Miami Amigos of the short-lived Inter-American League and ended the year by appearing in 22 games for the Padres.

Since then, Tolan coached in the majors and managed various minor league teams. After serving as a member of the Padres staff from 1980 to 1983, he was skipper of the Beaumont Golden Gators of the Texas League in 1984 and 1985. He was a Seattle Mariners coach in 1987 and led the Erie Orioles of the New York-Penn League in 1988 and 1989. In 1989-90, Tolan was a player-manager with the St. Petersburg Pelicans of the Senior Professional Baseball Association and led the club to the league's first, and only, championship. He batted .320 in 24 games. In 1990, he again was the player-manager for the Pelicans, but only played in one game and did not bat before the league folded. Tolan managed the Great Falls White Sox of the Pioneer League in 2006.

Tolan's son, Robert "Robbie" Tolan played in the Washington Nationals organization in 2007. On December 31, 2008 at 2:00 AM, Robert was shot in the stomach during an altercation with a police officer in front of the family's home in Bellaire, TX, as the officer mistakenly believed he was armed and had stolen a vehicle. That altercation was investigated as a case of possible racial profiling. The young Tolan's attorney claimed that the incident may have ended Robert's baseball-playing career. The police and the city of Bellaire eventually offered a $110,000 settlement just as a civil trial was about to begin in September, 2015.