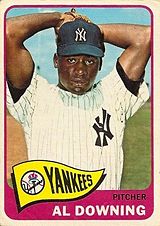 Al Downing pitched 17 years in the majors, winning 123 games, but is best remembered as the man who gave up Hank Aaron's 715th home run.

Downing came up with the New York Yankees in 1961 and became the first African-American starting pitcher in club history. Dubbed the "Black Sandy Koufax", he led the American League with 217 strikeouts in 1964. He had his best year with the team in 1967, going 14-10 with a 2.63 ERA and making the All-Star Team. That season, he became the first pitcher in Yankees history to record an "immaculate inning", i.e. one in which he struck out the side on nine pitches.

As the 1960s came to a close, Downing struggled and was traded to the Oakland Athletics after the 1969 campaign. After half a season there, he was acquired by the Milwaukee Brewers. He moved again to the Los Angeles Dodgers in 1971 and responded by winning 20 games and leading the National League with 5 shutouts while being named the circuit's Comeback Player of the Year.

On April 8, 1974, Downing gave up Aaron's record-breaking 715th home run. During his final three seasons in the majors, he pitched primarily out of the bullpen. Over his career, he made appearances in three World Series, two with the Yankees and one with the Dodgers, but was on the losing side each time.

Following his playing days, Downing worked as a broadcaster for the Dodgers, Atlanta Braves and CBS Radio.