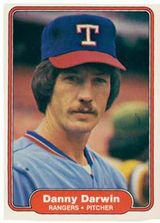 Danny Darwin is the brother of Jeff Darwin. Darwin played long enough to have teamed with both Sandy Alomar Sr. and Roberto Alomar, and to also have played with both Bobby Bonds and Barry Bonds.

Despite a solid career ERA+ of 106, Darwin's 171 wins are the most of any modern player that never made an All-Star team or played in the postseason. On April 19, 2018, he was named pitching coach of the Cincinnati Reds following the firing of Mack Jenkins along with manager Bryan Price and stayed until the end of the season.