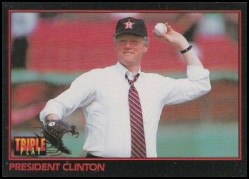 Bill Clinton served five terms as the Governor of Arkansas before becoming the 42nd President of the United States, serving from 1993 to 2001. In 1993, he became the first President to throw the first pitch from the pitcher's mound. On October 27, 1998, he signed the Curt Flood Act overturning part of baseball's 70-year-old antitrust exemption and putting baseball on a par with other professional sports on labor matters. The Flood Act overrode part of the Federal Baseball ruling, which exempted baseball from antitrust laws on grounds that it was not interstate commerce. That exemption deprived baseball players of protections enjoyed by other professional athletes; the Players' association had blamed it for contributing to baseball's eight work stoppages since 1972.

Clinton grew up a St. Louis Cardinals fan. In contrast, his wife, Hillary Rodham Clinton, grew up a Chicago Cubs fan. Hillary had a significant political career of her own. After serving as First Lady for eight years, she served a term as Senator from New York, ran unsuccessfully for the Democratic Party presidential nomination in 2008, served as Secretary of State during President Barack Obama's first administration, and then secured the Democratic Party presidential nomination for herself in 2016 but lost to Donald Trump in the general election.