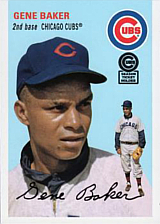 Gene Baker, a Negro League player, became a 29-year-old rookie with the Chicago Cubs. Although subject to racism, he played alongside Ernie Banks for several years, and then spent a few years with the Pittsburgh Pirates, including their 1960 World Series win.

Born in 1925 in Iowa, Gene was a star at basketball and track in high school but did not play baseball as there were no blacks on the team. He played sandlot ball instead. During World War II, he was in the Navy beginning in 1943, playing basketball and baseball there. The experience encouraged him to take up semi-pro ball back in Davenport, IA, and the Kansas City Monarchs became interested in him. In 1948, he hit .293 at shortstop with great defense. The next year, he continued with the great defense but his average suffered. Undeterred, the Chicago Cubs purchased his contract.

Starting with the International League's Springfield squad, he then moved over to Des Moines of the Single A Western League. He moved up to Triple A with the [[Los Angeles Angels (PCL)|Los Angeles Angels] and stayed there for three more seasons - 1951-1953. He was an iron man, playing every day, and while his batting averages were decent but not great, he made a name for himself with defense, stolen bases, and home runs. There was controversy at the time as to whether Baker was being kept back because of his race. The Cubs at the time had many problems with their shortstops, and could have used a good defender with some pop who could steal bases.

With the Cubs and Ernie Banks[edit]

In 1953, after playing well in Los Angeles, Baker became the first black player ever to make it onto the Cubs roster. However, he suffered an injury before he could debut, and by the time he was again healthy, Ernie Banks had become the first black player to appear in a game for the Cubs. Banks had been signed primarily to be Baker's roommate. This created a problem for the Cubs, because they now had two shortstops. They chose to move Baker over to second base because he was the older and more experienced man who they felt would be better able to adjust to a new position. Baker and Banks became the first black double play combination in the majors in September 1953. It is said that Baker taught Banks much about how to play shortstop; Baker was six years older.

Baker saw action in only 7 games in 1953 (Banks appeared in 10). In 1954, both officially became regulars and Baker hit .275 with 13 home runs. Neither was Rookie of the Year, an award that went to outfielder Wally Moon of the St. Louis Cardinals, who hit .304 with 12 home runs - Hank Aaron was also a rookie that year, and finished second in the voting. Both Baker and Banks were named to the Sporting News All-Rookie Team. Baker would be a defensive leader in various categories in the next few years, but also lead the league in errors at his position. Offensively, he always hit over .250 for the Cubs, usually with moderate doubles and home run power. He made the All Star team in 1955, playing every inning of every Cubs game.

Baker was slotted to be the Cubs third baseman in 1957, playing all 12 games there before being traded. Bobby Morgan, a weak-hitting veteran, took over the second base job for the Cubs. Third base became a real problem for the Cubs after Baker left - Ernie Banks, who played more shortstop that year than anyone else on the Cubs, also played more third than any other single player as ten different players each appeared for one or more games at third base. Baker, meanwhile, had been traded with Dee Fondy to the Pittsburgh Pirates for Dale Long and Lee Walls.

Part-time player for the Pittsburgh Pirates[edit]

With the Pirates, Baker became an all-purpose player, appearing at third base 60 times, shortstop 28 times, and second base 13 times. It was his first time in the majors at shortstop, the position he had played prior to the major leagues. He shared third base with Gene Freese and the first Frank Thomas, filled in for an injured Dick Groat at shortstop, and occasionally gave Bill Mazeroski a day off at second base. Baker hit .266 with 19 doubles for the Pirates. In 1958, Baker was going to be the third baseman as the Pirates were moving Thomas to the outfield, when Baker hurt his knee and had to undergo surgery, which cost him all of the 1959 season. In his brief time in 1958, he hit .250 in 29 games. He did come back in 1960, the year of the World Champion Pirates. He could not find a spot to play on a team that had Dick Groat, Bill Mazeroski, and Don Hoak all playing quite well, so he was a backup, appearing in 33 games and getting 37 at-bats. He hit .243, all singles. In the World Series, he appeared 3 times as a pinch-hitter. 1961 finished his major league career. He had 10 at-bats with one hit and was released in June.

Only one month later, Baker was asked by the Pirates to become the first black minor league manager with an affiliated team (there had been black managers for independent teams, but never for a minor league team in a major league structure). He managed the Batavia club in the Class D New York-Pennsylvania League. The team improved quite notably under Baker, partially because Baker also played and hit .387. In 1962, he was a player and coach at Columbus. In 1963, he returned to the Pirates as a coach. When Danny Murtaugh was thrown out of a game, Baker became the interim manager for two games, making him the first black to manage a team in a major league game. However, it would not be until Frank Robinson became player-manager for the Cleveland Indians in 1975 that a black man would be appointed as a full-time big league manager. Baker managed Batavia again in 1964, and served the Pirates in additional years as a minor league coach and manager. He later became their top scout in the midwest for 23 years.

Baker continued to live in Davenport, IA, where he had been born. R.C. Stevens, who had been friends with him in the majors, chose to come to Davenport to live near his friend and built a house next door to Baker's house. Baker died in Davenport in 1999.

"Gene was as good a shortstop as I've ever seen — and that includes Pee Wee Reese." - Bobby Bragan, manager of the 1953 Hollywood Stars, arch-rival of Baker's Los Angeles Angels in the Pacific Coast League.