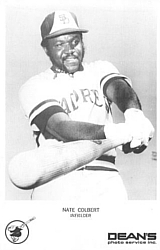 “As I walk up to the plate... I automatically touch my helmet. It gets me thinking about what I want to hit. Then I draw a Roman numeral seven in the dirt, backwards, with the end of the bat. I don’t know why I do it. I just do it. It clears my mind.” - Nate Colbert, 1973

Nate Colbert cleared his mind and swung a mighty bat in ten seasons in the big leagues, belting 173 home runs. The first superstar in the existence of the San Diego Padres, he twice hit 38 homers in a season before back problems hastened his big league departure at just 30.

Nate's 1972 was his signature season. He made the second of three consecutive All-Star appearances, socking another 38 home runs while batting .250/.333/.508 and establishing career highs in runs scored (870 and RBI. He racked up 111 RBI for a team that scored only 488 runs all season. No one else on the team had as many as 50, and no player had ever driven in such a high percentage of his team's runs. Colbert's RBI performance in 1972 is memorialized in an article in The Complete Armchair Book of Baseball titled "Nate Colbert's Unknown RBI Record". His signature moment also came that season. On August 1st, Nate tied Stan Musial by hitting five home runs in one day against the Atlanta Braves. In the first game of the doubleheader, Colbert had two homers and five RBI. He followed with three homers and eight RBI in the nightcap. Game 1 of the doubleheader Game 2 of the doubleheader

To this day, Colbert remains the Padres career leader in home runs with 163. He was an inaugural inductee to the club's Hall of Fame in 1999. The similarity scores method shows similar players as a cornucopia of more recent sluggers, including Lee Stevens, Paul Sorrento, Lucas Duda and Brandon Moss.