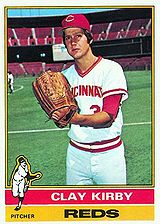 Clay Kirby was a pitcher for three National League teams between 1969 and 1976. Kirby long held the distinction of being the San Diego Padres pitcher who had pitched the most hitless innings in a game for that franchise, until Joe Musgrove finally broke its no-hitter drought in 2021. This happened on July 21, 1970 in the Padres' second season; he pitched 8 hitless innings against the New York Mets but was trailing 1-0 when his turn to bat came up with two outs in the bottom of the 8th. Manager Preston Gomez infamously sent in pinch-hitter Cito Gaston to bat for him, and he struck out. Jack Baldschun took over on the mound but allowed a hit to the first batter he faced in the 9th, and the Padres lost the game. Gomez's decision was highly controversial at the time, and many fans think it cursed the Padres, and explains why it took them so long to achieve a no-hitter. A few other Padres pitchers - Steve Arlin, Andy Ashby and Chris Young - later took a no-hitter into the 9th inning, but all eventually allowed a hit before the inning ended, so Kirby's eight-inning stretch remained the longest without a hit in Padres history - until Musgrove achieved a no-no.

During his rookie campaign, Kirby led the National League in losses (20) and was third in the league in bases on balls (100).

He was a spot starter for the Cincinnati Reds in 1975, helping them win the 1975 World Series. He then finished his career with one season with the Montreal Expos in 1976, but he went only 1-8, 5.72 for the last-place team.

Some or all content from this article is licensed under the GNU Free Documentation License. It uses material from the Wikipedia article "Clay Kirby".