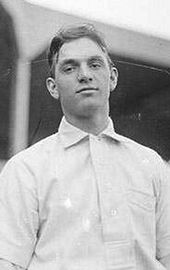 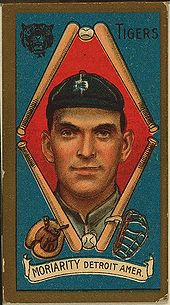 Third baseman George Moriarty was one of the best-known figures in baseball in the 1910s and 1920s. He was fiery on the playing field but a gentleman off it and occupied just about every possible role, from player to manager to umpire to writer to scout during his career. He was known for his great throwing arm, his daring on the basepaths and his ability as a fighter, but in spite of being a bigger than average man, he had little power, which was the major hole in his game. 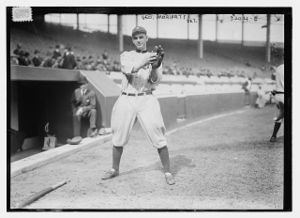 Born in Chicago, IL, Moriarty was the son of a streetcar driver who was a former semi-pro catcher. George learned to play on the notoriously competitive sandlots of the Windy City. He began his professional career in 1901 in the Quad Cities, playing for both Davenport and Rock Island in the Three-I League. In 1903, he was playing third base for the team fielded by Chicago's Oliver Typewriter Company in an exhibition game against the Chicago Cubs when he caught his opponents' attention by starting a triple play. Cubs manager Frank Selee gave him a one-game tryout on the last day of the season; he was the youngest player in the league and looked visibly nervous when he went 0 for 5 in his debut. He started the 1904 season with the Cubs, but was sent down to Little Rock of the Southern Association after going hitless in four games, then was sold to Toledo of the American Association a few weeks later. Moriarty got into his first famous fight with Toledo in 1905, when he went after Indianapolis Indians manager Ed Barrow, who was riding him from the bench, and won an uncontested victory. He led the league with 51 stolen bases that year. After the season, his contract was sold to the New York Highlanders.

Moriarty was a utility player for the Highlanders in 1906, batting .234 while playing at five different positions. In 1907, still without a regular position, he batted 474 times and hit .277, then continued along the same line in 1908 when he slumped to .236. He escaped from New York after the season when he was traded to the Detroit Tigers, where he would play most of his major league games as a teammate of Ty Cobb and Sam Crawford. He was the team's regular third baseman in 1909, batting .273. He scored four runs in the 1909 World Series, batting sixth in the lineup behind Cobb at # 3, Crawford at clean-up, and Jim Delahanty in the # 5 slot. The Tigers were defeated by the Pittsburgh Pirates in seven games; he played every game in spite of being spiked in Game 6 and receiving a gash that required 15 stitches. While with the Tigers, he was one of the few players willing to take on Ty Cobb. It is said that on one occasion, Cobb wanted to come to punches, but Moriarty handed him a bat, saying he needed a weapon to "even things when fighting an Irishman"; Cobb backed down. Moriarty was known for his daring baserunning, particularly his knack for stealing home. He is documented to have stolen home at least 11 times, although the legend that developed around him made it sound that he would look to steal any time he reached third base. On May 16, 1909, Boston catcher Bill Carrigan tagged him out on one such unsuccessful attempt to end the game, after which harsh words were exchanged and Carrigan had to leave Bennett Park under disguise for his own safety. That incident prompted writer William Cameron to write a text that would become supremely famous, entitled "Don't Die on Third", extolling the virtues of Moriarty's brand of go-for-broke baseball.

While Hughie Jennings was the manager of the Tigers, George Moriarty was the team captain from 1911 to 1915. During that time, the Tigers fell from contention, and Moriarty hit between .239 and .254 every year but provided above-average defense at third base. He was also known for his quick reactions: on April 24, 1911, he started a triple play when he deliberately dropped an infield fly and threw out the two confused baserunners. By 1915, he was a player-coach, with Ossie Vitt taking over regular duties at third base. He was given his unconditional release after the season and in 1916, he went down to the Memphis Chickashaws as playing manager after going 1 for 5 as a pinch hitter with the Chicago White Sox in the first days of the season.

In 1917, Moriarty became an American League umpire, which appeared to be his true calling. In a bizarre move that would not be countenanced these days, he then moved to the other side of the chalk as the Detroit Tigers manager in 1927 and 1928. After that, he returned to umpiring from 1929 to 1940. Among famous incidents during his umpiring career was the time in 1932 when he fought four members of the Chicago White Sox simultaneously, Milt Gaston, Charlie Berry, Frank Grube and Lew Fonseca, the player-manager, after some disagreements about the calling of balls and strikes. He fought them to a draw. Columnist Joe Williams joked afterward that "Moriarty must be slipping; I can remember when he used to take on whole teams as a warm-up". He was given a public reprimand by American League President Will Harridge for this incident, while the Chicago players were fined or suspended. In the 1935 World Series, he ejected three Cubs players, Charlie Grimm, Tuck Stainback and Woody English, for heckling the Tigers' Hank Greenberg. He was fined $200 by Commissioner Kenesaw Mountain Landis for not consulting with him prior to the ejections; to this day, Moriarty has ejected more players than any other umpire from World Series play. Still, he was by all accounts an excellent umpire, and was named the American League's best umpire in a poll of players conducted by The Sporting News in 1935.

During his time as a man in black, he wrote a nationally-syndicated column that featured his observations about the game and his specialty, poetic elegies about departed baseball figures. Among those honored in verse were John McGraw, Miller Huggins, Silk O'Loughlin and Lou Gehrig; some of his verses were engraved on Frank Chance's tombstone. He also wrote a number of successful songs and undertook public speaking tours in the off-season that were very well received. In the days before radio and television, he was a major media figure, not bad for a school dropout. Moriarty was then a Tiger scout from 1945 to 1958. Among the players he discovered was future batting champion Harvey Kuenn.

George Moriarty married Ada Stone in 1905. He had a son, George Jr., before the marriage ended. He remarried in 1936 with Mary Allen and had a second son, David. He was divorced in 1943. His grandson is actor Michael Moriarty, who appeared in the classic baseball film Bang the Drum Slowly, among other work. He died of kidney cancer in Coral Gables, FL, in 1964. His obituary in the Sporting News called him "Battling Moriarty - Ump Who Loved to Fight". His brother Bill Moriarty appeared in 6 games for the Cincinnati Reds in 1909.