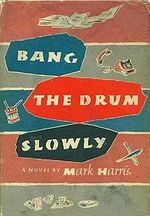 Bang the Drum Slowly is a baseball-themed novel by Mark Harris that came out in 1956. It is considered the author's best novel and a classic of baseball fiction; it was turned into a movie of the same name in 1973, which is itself considered among the best baseball movies ever made.

The novel is the second of the four novels about lefthanded pitcher Henry Wiggen of the New York Mammoths, a fictional major league baseball team. The first novel in the series, The Southpaw, was published in 1953 and tells the story of how the young pitcher became a star. In Bang the Drum Slowly, he is one of the best known ballplayers in the country and a leader on the Mammoths, and is usually known as "Author" Wiggen in recognition of his unusual avocation as a writer: in the book's fictional universe, he is the author of The Southpaw, which describes the 1952 season and has been a huge success, while the second book in the series is presented as his telling of the Mammoth's 1955 season. Harris would go on to write two sequels in the series, A Ticket for Seamstitch (1957) and It Looked Like For Ever (1979), but they were less successful than the first two volumes. The first two books can be read independently of each other.

Wiggen is a very smart man, and one who is conscious of being exploited by the Mammoths' rich owner, who is an automobile magnate from Detroit. He holds out in spring training for a better salary, and has a number of side gigs to increase his earnings. In addition to writing books, he also has taken a course to be an insurance salesman and his clients are almost all ballplayers, and he sings in a barbershop quartet with three teammates, getting paid for appearances on various television shows. Part of this is prompted by run-ins he has had with the Internal Revenue Service that have left him in debt, and he is now very conscious of the fiscal consequences of all of his dealings. He is recently married and his wife Holly, who is the real tax policy expert, is expecting their first child.

However, the novel centers not on Wiggen, who is the narrator in a folksy and very oral voice, in which he uses colloquialisms such as "I should of" and "he is libel to do something", but on his roommate Bruce Pearson, the team's third-string catcher. The novel starts when in the dead of winter, Wiggen receives a collect call from Rochester, MN from where Bruce asks him to come pick him up at a hospital. He flies across the country and learns that Pearson has Hodgkin's disease and is doomed, although no one can give a time frame more precise than a few months to 15 years. The two could not be more different, as Pearson is the most dispensable player on the team, not an intellectual in the least (he calls Wiggen "Arthur", not picking up on why others call him "Author"), and plays and lives by instinct. But Wiggen, who is at first bugged by the whole matter, comes to understand how much he likes the bumbling catcher, pushed by his wife who appreciates Pearson's human qualities. The two drive back to Pearson's home in rural Georgia and Wiggen endeavors to do his best to keep the news of Bruce's disease quiet and protect his friend, who can be easily taken advantage of. The book then describes the season, how the truth about Pearson gradually becomes known to more and more people, while Pearson himself remains perfectly zen through the whole ordeal, until he has to leave the team towards the end of the season, no longer able to play.

Harris explained that he story was inspired by that of a friend of his who was an athlete and died of cancer before the age of 30 in 1954. In spite of the somber subject matter, the book is very humorous, some of the hi-jinx in the clubhouse being very similar to those Jim Bouton would describe in Ball Four 15 years later. But it is also a profound reflection on the meaning of friendship, particularly between persons who are very different, and on the meaning of death, especially the senseless death of a young man in his prime. The book's title is taken from a verse of the song Streets of Laredo, about a dying cowboy who is contemplating his own funeral. In an ironic touch, the song is sung by "Piney" Woods, an airhead young catcher on the team who fancies himself a motorcycle racer, a cowboy (complete with 10-gallon hat and loaded pistols) and a country and western singer. Yet even coming from such an unlikely source, the song has a great deal of poignancy, as Woods is unaware that his teammate is a condemned man. Typically, Pearson blissfully misses the connection between the song and his own condition, but Wiggen cannot escape it.

The book was a huge success and has been reprinted regularly since its original publication. In 1973, the movie taken from the book starred a young Robert De Niro as Pearson and Michael Moriarty as Wiggen. It was another big success, both critically and at the box office. It was directed by John Hancock while Harris wrote the screenplay.