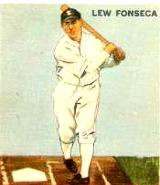 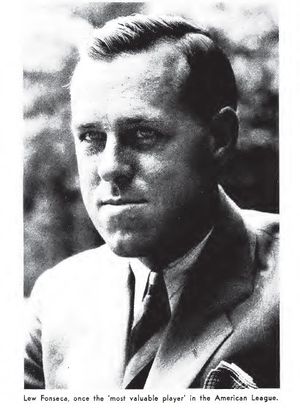 Lew Fonseca had to make a choice early in life - baseball or professional singing. He was a classically-trained singer, with five years of voice lessons, who sang professionally during the off-season in the early 1920s.

He broke into the majors at the age of 22, after attending St. Mary's College in California, and played four seasons with Cincinnati. It was a team led by Edd Roush, Eppa Rixey, Dolf Luque, Jake Daubert, and Heinie Groh, but in Fonseca's best year, 1922, he hit .361 in 89 games.

After a poor 1925 season, he was selected off waivers by the Philadelphia Phillies. He hit .319 with the Phillies, and then did not play in 1926 in the majors, hitting .381 with 21 homers for Newark.

In 1927, he moved to the Cleveland Indians for four seasons and part of a fifth. His best year was 1929, when he won the batting title and had 103 RBI. Earl Averill was a 27-year-old rookie with Cleveland that year.

He moved to the Chicago White Sox for most of 1931, and hit .312 for the season between Cleveland and Chicago. He finished out his career in Chicago playing occasionally in 1932 and 1933.

Similar players (according to the similarity scores method) include his contemporary and Chicago teammate Fatty "Fatty" Bob Fothergill, although setting baseball aside, they were quite different: Fothergill died at the age of 40 while Fonseca lived to age 90. Also, Fothergill was notorious for being out of shape (hence the nickname Fatty), while Lew Fonseca generally took care of himself.

Following his retirement from baseball, Fonseca was an early pioneer in making highlight films of World Series and All-Star Games that played as newsreel footage in the movie theaters of the 1930s and 1940s. He later became producer for Major League Baseball at least through 1966, when he produced MLB's official highlight reel for the 1966 World Series between the Baltimore Orioles and Los Angeles Dodgers.

Fonseca remained involved with professional baseball well into his eighties. He was a hitting instructor for the Chicago Cubs until the age of 82 and was an exponent of line drive hitting sprayed to all parts of the field. Among his pupils were Rick Monday and Bill Madlock. In many respects, Fonseca's contributions off the field rivalled or even eclipsed what he accomplished on the field.

Mystery writer Stuart Kaminsky has written a popular series of books involving the sleuth Lew Fonesca (F-O-N-E-S-C-A, not Fonseca), but many readers say "Fonseca" instead of "Fonesca" even if they have never heard of the baseball player named Fonseca.

Named to "The Top 100 Greatest Indians Roster", as created by the Cleveland Indians in 2001.