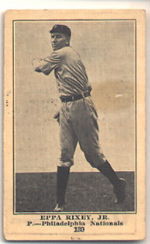 "Eppa was just great. He was great as a pitcher, fielder, and competitor. I look on him as the most outstanding player I came in contact with in my entire career." - Bubbles Hargrave

Hall of Famer Eppa Rixey won 266 games in the majors, all in the National League. He was a star in the deadball era and continued to pitch well in the lively ball era, winning 20+ games in 1916 and three more times in the 1920s. At 6'5" , he was the tallest player in the majors for most of his career, but did not have great speed. Instead, he relied on a change-up and pitched to contact, striking out relatively few hitters.

His Gray Ink score of 175 shows that he was frequently among the league leaders, although his Black Ink score of 10 shows that he almost never led the league. Five of the ten most similar players are in the Hall of Fame, with two more (Tommy John and Jim Kaat) strong contenders. However, the most similar player, Jack Powell, is not in the Hall, although his career was not as strong as that of Rixey. Powell, interestingly, finished his major league career in 1912, the same year that Rixey started in the majors.

Rixey's election to the Hall of Fame can be largely attributed to Warren Spahn: when he set the National League record for most wins by a lefthander, it was Rixey's record he broke. This focused attention on the old pitcher who was still alive, and his vote total in the BBWAA vote increased significantly in both 1960 and 1962. As soon as he became eligible for election by the Veterans Committee, in 1963, he was voted in. He died only four weeks after learning of the honor. His reaction, as quoted by the Sporting News: "They selected me to the Hall? I guess they're scraping at the bottom of the barrel."

Rixey's father was a banker and Eppa graduated from the University of Virginia with a degree in chemistry. He came straight to the majors without spending time in the minors, but during the off-season he earned a master's in chemistry and also taught Latin at a high school. Eppa at first did not want to pitch in the majors, saying that he planned a career as a chemist. However, he was persuaded because his father's bank was struggling and the economy was not strong at the time. He lost the 1918 season to the war, serving in the Chemical Warfare Division due to his scientific background. During off-seasons from 1924, he worked at the insurance agency which his father-in-law founded; his son and grandson, both also named Eppa Rixey, succeeded him in running the agency. Source: SABR Biography of Eppa Rixey.

His first baseball card appearance was in the 1916 M101-4 Sporting News set.

"Eppa was also known as 'Jephtha,' a nickname created by Cincinnati sportswriter Bill Phelon. Rixey mused, 'It sounds like a cross between a Greek letter fraternity and a college yell.' - from Rixey's biography at the Cincinnati Reds Hall of Fame site