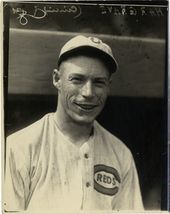 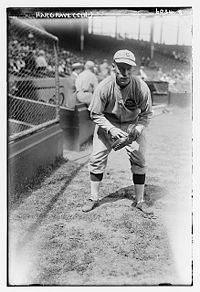 Bubbles Hargrave was a catcher who is best remembered for winning the National League batting title in 1926. His career batting average was .310.

Hargrave, born Eugene Franklin Hargrave, is said to have received the nickname "Bubbles" because he stuttered when saying words starting with "B". He is supposed to have hated the nickname.

His father didn't want him to play baseball, so Hargrave tried the upholstery business but didn't like it. That out of the way, he went into minor league baseball in 1911, with the Terre Haute Miners of the Central League.

Hargrave broke into major league baseball briefly with the Chicago Cubs from 1913 to 1915. Since Roger Bresnahan and Jimmy Archer spent most of the time behind the plate, he did not see much playing time, appearing in only 41 games in those three seasons with the Cubs. He did not come back to the majors for six more years.

In 1921, Hargrave popped up again to the majors with the Cincinnati Reds, the team with which he was to spend the next eight seasons. Catchers in that day didn't play every day, and he was typical of the time. In the first seven of the eight years he spent with Cincinnati, he was always in at least 87 and at most 118 games per season. His at-bats fluctuated between 260 and 380 in a season.

The lively ball era inflated batting averages, but even so Hargrave's was good. He hit over .300 six seasons in a row with the Reds, in an environment where the team batting average tended to be around .290. In 1923, he hit .333 and led the league in hit-by-pitch. On the Reds, his batting average that year was beaten only by Edd Roush.

In 1926, Hargraves led the league with a .353 average. The rules at the time required that a player appear in 100 games to qualify for the batting title. While he did not catch that many, he also served as a pinch-hitter on occasion, barely making it past the minimum with 105 appearances. His teammate Cuckoo Christensen was second in the league with .350, hit in the same way with fewer than 400 plate appearances but with over 100 games. Oddly enough, Cincinnati was not a hitter's park.

In 1928, Hargrave's eighth season with Cincinnati, he slipped a bit to .295 at the age of 35. In the next season, he did not play major league baseball, but was player/manager for St. Paul, where he was second in the league in batting. The team finished second in the league.

In 1930, the Yankees used Hargrave as a backup catcher to Bill Dickey and he hit .278 on a team whose batting average was .309.

Back in the minors in 1931, Hargrave was with Minneapolis, and then with Buffalo in 1932.

His brother Pinky Hargrave also played in the major leagues. They are not only one of few sets of brothers to both play major league catcher, but they likely have the most amusing set of nicknames for major league brothers: Bubbles and Pinky.

He managed the St. Paul Saints in 1929. Despite a 102-64 record, the team finished second in the American Association. In 1934, he managed the Cedar Rapids Raiders for part of the season. He then embarked on a long career working in a valve company.

Hargrave was inducted into the Indiana Baseball Hall of Fame in 2005.