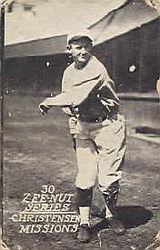 He did enjoy a solid minor league career, from at least 1921-1933. Before coming to the Reds, Christensen had spent four seasons with the St. Paul Saints, leading the league in runs scored one season and leading the league in stolen bases another season. Teammates included Chuck Dressen and Tom Sheehan. After his major league days he spent years in the American Association and in the Pacific Coast League. He later was an umpire who worked college and semipro games, sometimes filling in with the Pacific Coast League

Christensen was nicknamed "seacap" or "cuckoo christy". He liked to get attention by doing things like somersaults before he caught fly balls.