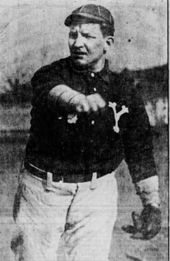 Jack Powell pitched 16 seasons in the big leagues, winning 20+ games in a season four times during the first half of his career.

During the second half of his major league career, Jack pitched for the St. Louis Browns, a team which was not very good. If he had pitched for a different team, he might be in the Hall of Fame since he continued to be an above-average pitcher for most of that time.

Powell, born in Bloomington, IL, pitched for the Fort Wayne team in 1896. He came up to the majors in June 1897 and stayed there. After his major league career was over, he won 17 for the Louisville Colonels in 1913 and also pitched for the Venice Tigers in 1914 (he and Joe McGinnity were the two oldest players on the team).

The SABR biography of Powell says that he played semi-pro ball both before and after his pro career.

Only two pitchers have ever won a game in which they gave up at least 7 runs in the 1st inning: