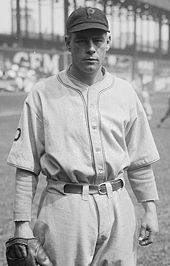 Emil Yde, as of 2006, is the only player in Major League history with a last name that starts with "Yde". There are no players in the minor leagues currently that have a chance of "threatening" this title any time soon.

Yde gets undervalued a lot by commentators. They notice that he burst onto the scene as a rookie, going 16-3, and then see him as not producing anything further. One commentator called him a "one-year wonder" [citation needed], while another said "he slipped to 17-9" in his second year [citation needed]. Yde did in fact have a great rookie season, leading the league in winning percentage, and going 16-3 on a team that finished only third in the league. He then followed up with a 17-9 season which was still in the top ten in the league in winning percentage. It was good enough that his team, the 1925 Pittsburgh Pirates won the pennant and the 1925 World Series, in which Yde pitched once.

Yde was again over .500 in 1926, but struggled in 1927. Although he did not pitch in the 1927 World Series, he scored a run as a pinch-runner. In 1928, he played in the American Association, winning 19 games, and came back to the majors for one more season in 1929, winning more than 2/3 of his decisions while pitching mostly in relief.