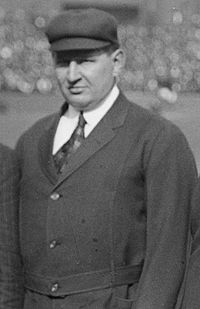 Cy Rigler was a National League umpire for 30 seasons between 1906 and 1935. He is best remembered for signaling strikes with a hand motion in addition to a yell, and for his size, which is reported to have topped 270 pounds on his six-foot frame.

Rigler was named to the NL staff full time in 1907, shortly before his 25th birthday, making him the youngest umpire in Major League history. During his 28 years as a full-time umpire, he called 10 World Series. He was also on the field at the first All-Star Game in 1933.

Rigler is probably best remembered for calling the famous "phantom catch" in the 1925 World Series. Earl Smith hit a pop fly into the right field corner; Sam Rice fell into the bleachers and came up with the ball in his glove. Rigler called Smith out and controversy ensued for the next 50 years. Upon Rice's death, a letter was opened and Rice affirmed he did catch the ball. Rigler had made the correct call.

Cy Rigler retired from the field after the 1935 season. He was placed on the supervisory staff of the National League but he died during the off-season of a brain tumor.