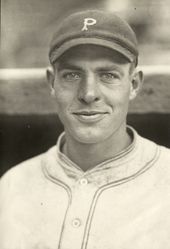 Shortstop Glenn Wright reached the majors with the Pittsburgh Pirates in 1924 and as a rookie set a record with 601 assists in a season (since broken by Ozzie Smith). After five years as a starter for the Pirates, he was traded to the Brooklyn Dodgers but missed most of the 1929 season after injuring his arm while playing handball. He hit .321 with 11 home runs and 126 RBIs for the Dodgers in 1930 but suffered a leg injury the following year that ultimately cut short his career.

After the tragic bus crash in 1946 that killed nine members of the Spokane Indians of the Western International League, Wright came out of retirement to manage the team. He had also managed the 1937-1939 Wenatchee Chiefs and the 1955 Corning Red Sox. In 1957, he was a coach for the San Francisco Seals.