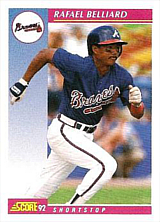 Rafael Belliard was signed as a free agent by the Pittsburgh Pirates and scout Pablo Cruz. He is a distant cousin of Ron Belliard and related to Diógenes Belliard. According to Bill James's Win Shares, Belliard is the worst player to play in at least 1,000 games. He only had 36 win shares, and all the other 1,300+ position players who played that many games all had at least 44.

Belliard played on the Dominican national team that won the Silver Medal at the 1979 Pan American Games, hitting .375. In 1988, he set the record for most at bats without a double, 286, though he managed 4 triples that year. The previous record-holder was Choo Choo Coleman (247). Just prior to a Pirate spring training game in 1990, the diminutive Belliard, wearing a baggy uniform, was mistaken by an autograph-seeking fan for a bat-boy, and was asked when the players would be back out on the field. Despite playing in 21 World Series games throughout his career with the Atlanta Braves, Belliard never crossed home plate with a World Series run. He went hitless in 16 at bats when the Bravos won the 1995 World Series.

After his playing career ended, he was a minor league infield coach with the Atlanta Braves (2000-2005). He was named the infield coach for the Detroit Tigers for the 2006 season where he remained through 2013. In 2013 he added the role of first base coach. Belliard moved to the Kansas City Royals in 2014 as a special assistant to the general manager. In 2015 Belliard kept that role and added minor league infield coordinator to his resume through the 2019 season. In December 2019, his title changed to Advisor to the General Manager / Special Assignment Coach so no one knows exactly what he does. Belliard did continue to instruct the Royal's infielders in 2020. In 2022 his title was special assistant to the president of baseball operations and general manager.