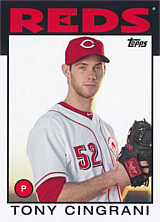 Cingrani was drafted by the Cincinnati Reds in the third round of the 2011 amateur draft. He was signed by scout Jerry Flowers for a reported $210,000 and debuted with the Billings Mustangs, going 3-2 with a 1.75 ERA in 13 starts. Beginning 2012 with the Bakersfield Blaze, he was 5-1 with a 1.11 ERA in 10 starts before being promoted to the AA Pensacola Blue Wahoos. For Pensacola, he continued to put up impressive numbers, going 5-3 with a 2.12 ERA and 101 strikeouts in 16 outings. This earned him a September call-up to the majors, and he made his big league debut on September 9th against the Houston Astros. In 3 innings of relief work, he allowed only a hit, a home run to Tyler Greene, while striking out 5. H e made two more appearances out of the bullpen for the Reds that September, ending up with a 1.80 ERA and 9 strikeouts in 5 innings.

Cingrani headed into the 2013 season with an outside chance to make the starting rotation, but he was sent to the AAA Louisville Bats to start the year. He gave up only 3 hits and no runs in 14 1/3 innings in his first three starts for Louisville, prompting the Reds to bring him up. He made his first major league start on April 18th, facing another top prospect in Jose Fernandez of the Miami Marlins. Tony got the best of that duel, earning his first victory as the Reds routed the Fish, 11-1. He pitched 5 innings, giving up one run on 5 hits, walking 3 and striking out 8; the only blemish on his sheet was a solo homer by Justin Ruggiano. He had a memorable start on April 28th, facing the Washington Nationals. Not only did he pitch 6 scoreless innings, but he collected his first career hit, a single off Ross Detwiler in the 2nd inning. He also struck out a career-high 11 batters, including 4 in the 4th inning. That inning started when Denard Span reached on a dropped third strike by catcher Corky Miller, but, undaunted, Tony struck out Bryce Harper, Ian Desmond and Adam LaRoche in succession to end the inning. He was the 5th pitcher in Reds history to strike out four opponents in one inning and was credited with the 5-2 win. He had a very solid rookie season overall, going 7-4, 2.92 in 23 games, including 18 starts, pitching 104 2/3 innings with 120 strikeouts.

Things did not go as well for Tony during his sophomore season in 2014. He pitched only 13 times for the Reds, including 11 starts, and finished at 2-8, 4.55. In 2015, with a number of young starting pitchers, the Reds decided to move Cingrani to the bullpen, where they perceived they had a greater need, as their roster was shaky behind All-Star closer Aroldis Chapman. They felt that with his outstanding fastball and ability to pitch multiple innings, Cingrani could play a very useful role. Indeed, he started the season very well, with a 2.08 ERA over his first 11 appearances, although he sometimes went long stretches between appearances. He went on the disabled list with a shoulder strain in mid-June, and it was all downhill from there. He was 0-3, 3.47 in 24 games at the time of the injury, then he came back on July 22nd to make a spot start in the second game of a doubleheader against the Chicago Cubs, but gave up 5 runs in 2 2/3 innings, escaping with a no decision. He was not back until September, by the time the Reds were going with all-rookie starting rotation while he was in the bullpen. He pitched 10 times that month, all of those one inning or less, and by giving up 7 runs, he bumped his season's ERA to 5.67 while leaving management wondering what his role would be going forward.

Apparently, the idea was to have him do some closing, now that Aroldis Chapman was no longer around, having been dealt to the New York Yankees in the offseason. Tony made a career high 65 appearances in 2016, saving 17 games, but with a 2-5 record and elevated 4.14 ERA. He was used as a LOOGY in 2017 to mediocre results (5.40 ERA in 25 games) before moving to the Los Angeles Dodgers for Scott Van Slyke and a minor leaguer at the trading deadline. He was solid in his new situational role down the stretch, with a 2.70 ERA in 22 games, then made his only postseason appearances, allowing just a run in 7 appearances (5 innings) encompassing all three rounds before the Dodgers bowed to the Houston Astros. On May 4, 2018, he pitched a hitless 7th inning after Walker Buehler started a game against the San Diego Padres holding them hitless for six innings. Tony was followed by Yimi Garcia and Adam Liberatore adding a hitless inning each, combining for a 4-0 no-hitter. The game was played at Estadio de béisbol Monterrey in Monterrey, Nuevo León, making it the first no-hitter ever pitched outside the United States or Canada. He made 30 appearances that season before a shoulder injury shut him down. In 2019, he suffered a full labrum tear while making his way back, missing the entire season, yet was still dealt to the St. Louis Cardinals for Jedd Gyorko in what was a salary dump.