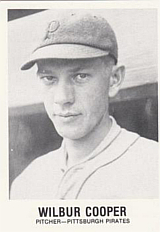 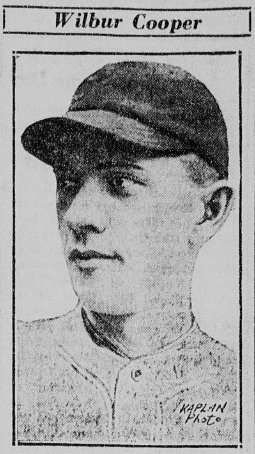 "Beyond his wonderful marks he owned a color and a grace that in his period was matchless. He was just fretful enough to be 'good copy' and he owned the easiest and most graceful throwing motion of his time. He had wonderful control of his deliveries and he tossed a ball up to the plate with less effort than any hurler in the league... His gloved hand moved with the quickness of a cat's paw. He was one of the best fielding pitchers... Cooper brooked no sloppy stuff behind him. He was a master at his business and he expected the men behind him to match his efforts." - Harvey J. Boyle, Pittsburgh Post-Gazette, February 25, 1933

Wilbur Cooper remains one of the all-time great pitchers in Pittsburgh Pirates history. Enjoying thirteen of his fifteen big league seasons in the Steel City, Wilbur finished with a career mark of 216-178 paired with a 2.89 ERA and 1,252 strikeouts in 3,480 innings.

Wilbur's career began in 1911 in Marion, OH. He popped up on the big league radar with his work for the Columbus Senators of the American Association in 1912. He took the ball 31 times, going 16-9 with 117 strikeouts in 219 innings. Debuting with the Pirates that August, his second appearance (and first start) was a shutout of the St. Louis Cardinals, winning 8-0 at Robison Field. He spun another shutout before the year was through, again of the Cardinals, but this time at Forbes Field, winning 4-0 and finishing the season with a 1.66 ERA. He was deployed as a swingman in 1913, going 5-3, 3.29, and spurned the Federal League prior to the 1914 season in a boon for the Bucs.

Pittsburgh finished just three games off the pace of the pennant-winning New York Giants that season and felt they were just a piece or two away from bringing a title home. Unfortunately for Cooper, he would be leaving town before the club turned back the Washington Senators in 1925; on October 27, 1924, he was lead dog in a trade with the Chicago Cubs to bring in George Grantham, Vic Aldridge and Al Niehaus. Cooper had his final 200-plus innings season with the Cubs in 1925, surpassing Rube Marquard for most innings by an NL left-hander in the process, but finished 12-14, 4.28, a far cry from his early 1920s performance. He broke another Marquard record, most starts by an NL lefty, in 1926 and ended up finishing the year with the Detroit Tigers, going a combined 2-5, 5.77 in 16 games.

Wilbur is one of only two pitchers to toss 3,000 innings with a sub-3.00 ERA and not be enshrined in Cooperstown. He held a number of Pirate pitching records, several of which were bested by Bob Friend while his games pitched record fell to Babe Adams in 1926, while he was still active. Among his similarity scores match-ups, number one is Rube Marquard, who went sailing right in to the Hall of Fame after a colorful (and largely fictitious) recollection of his playing days for Lawrence Ritter's The Glory of Their Times. If only Wilbur had been chosen to be chronicled; another Hall of Fame pitcher on his list, Stan Coveleski, was also sought out by Ritter. Don Drysdale, the third HOFer on his list, was the most celebrated of these four men and did not need Ritter to hunt him down to drum up voting support.

In retirement, Cooper lived in Pittsburgh for a time before moving to California in the 1940s. A Pittsburgh poll in 1969 voted him the greatest pitcher in Pirate history. He died of a heart attack four years later in Encino, CA.