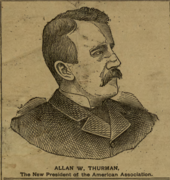 Allen W. Thurman, also known as Allan W. Thurman, was at the center of one of the major episodes in 19th century baseball. He was born in a prominent Ohio family around 1835; his father, Allen Granberry Thurman, served in the House of Representatives and the Senate and was the Democratic Party candidate for Vice-President in the 1888 Presidential election, running on the losing ticket with Grover Cleveland. The young Allen was also an attorney and had played baseball in Columbus, OH in the 1860s as an infielder.

Thurman was a minority owner of the Columbus Solons of the American Association, the second major league of the 1880s, which had come to a peace accord with the National League a few years earlier with the conclusion of the first National Agreement. An era of great prosperity ensued, but the players, feeling that they were not getting much benefit from increased revenues, created the Brotherhood of Professional Baseball Players to seek better salaries and an end to the reserve clause. Failing to achieve its aims through negociations, the Brotherhood launched the Players League in 1890, setting off a bitter war that left all three parties financially weakened. This is the point at which Thurman stepped into the limelight.

In October 1890, Thurman brokered an agreement between the three leagues that would provide for a smooth dissolution of the Players League and a return of its players to their original franchises. A National Board of Control was set up to rule on any disputes flowing from this agreement. Thurman was hailed as a savior of baseball and tagged "The White-Winged Angel of Peace" in newspapers. He was named chairman of the newly-created three-member Board and President of the American Association as a result of his efforts. His glory would be short-lived.

The first major cases on which the Board had to rule were those of Lou Bierbauer and Harry Stovey. The star players had played for the AA's Philadelphia Athletics until 1889, then jumped to the new Players League for the 1890 season. After the league disbanded, Bierbauer signed with the National League's Pittsburgh Alleghenys and Stovey stayed with Boston, most of the Boston Reds players having been absorbed by the NL's Beaneaters, but the Athletics still claimed the two players' rights. The Board examined the case and ruled against Philadelphia, with Thurman casting the decisive vote, explaining that Philadelphia had failed to formally reserve its rights to Bierbauer and Stovey. The media dubbed the Pittsburgh team "the Pirates" as a result of this incident - a name still used today - and the AA's owners were furious. At a meeting held in New York City on February 18, 1891, they dismissed Thurman as league President, replacing him with Louis Kramer of Cincinnati. The AA then denounced the National Agreement, and Thurman, still chairman of the National Board, declared all players under contract to the AA fair game to raiding by National League teams. A new war between the leagues had begun, which the AA lost badly, being forced to fold at the end of the season.

Explaining his infamous ruling, Thurman stated that if his position on the Board was solely to defend the interests of the American Association and its clubs, then he had been wrong, but if he had been named to uphold fairness and the rule of law, then he had made the right ruling. After his short term in baseball, he was active in politics. In 1889, he unsuccessfully sought the Democratic nomination for Governor of Ohio. He later earned some fame as an opponent of William Jennings Bryant and his "free silver" platform: he cast the Ohio delegation's vote for John Roll McLean (who also had significant baseball connections) against Bryant at the 1896 Democratic Convention in Chicago, IL. He was himself considered as a potential vice-presidential candidate at that convention, largely on the strength of his father's name. As President of the Ohio Board of Administration, in 1912, he advocated for the forced sterilization of the mentally incompetent.