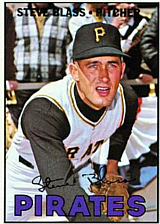 "Of all the mysteries that surround the Steve Blass story, perhaps the most mysterious is the fact that his collapse is unique. There is no other player in recent baseball history -- at least none with Blass' record and credentials -- who has lost his form in such a sudden and devastating fashion and been totally unable to recover." - Roger Angell, for The New Yorker

The story of Steve Blass is the story of one of the greatest baseball enigmas of all-time.

Blass spent his entire career with the Pittsburgh Pirates, beginning in 1964, and was a front-line starter, earning 15 or more wins on four occasions. Somewhere between the 1972 and 1973 seasons, Blass completely lost his command of the strike zone. After a 19-8 season in 1972 with a 2.49 ERA, a season in which he was runner-up in the Cy Young Award voting to Steve Carlton, Blass slipped to 3-9 with a 9.85 ERA in 1973. His -4.0 WAR that season still stands as the single-season record for lowest WAR as a pitcher. Blass struck out 117 and walked 84 in 249 2/3 innings in 1972, but in 1973 he struck out only 27 while walking an incredible 84 batters in just 88 2/3 innings. By 1974, Blass was pitching for the Charleston Charlies of the International League. No explanation was ever found for his loss of control. He never recovered and was out of baseball by 1975. To this day, a pitcher who completely loses control of the strike zone for no apparent physical reason is said to have "Steve Blass disease".

Following his playing career, he became a broadcaster in 1986, providing analysis on Pirates radio broadcasts for over four decades. He retired at the end of the 2019 season after 60 years in the Pirates organization. He was a teammate of his brother-in-law, John Lamb.

A fantastic story about his career can be found in the anthology Best American Sportswriting of the Century, written by Roger Angell that originally appeared in The New Yorker. The story tries to explain the inexplicable and swift decline in Blass' pitching between 1972 and 1973 and the subsequent end of his playing career.